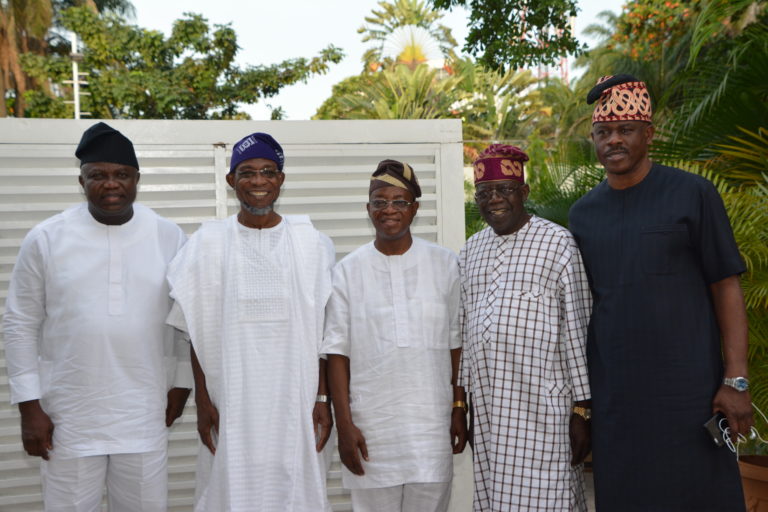 The National Leader of the All Progressives Congress, Asiwaju Bola Ahmed Tinubu, says the party’s victory in the Osun State governorship election shows that democracy is at work in the country.
Tinubu said this when he received Governor Rauf Aregbesola of Osun State and the newly elected state Governor, Alhaji Gboyega Oyetola, at his residence in Ikoyi, Lagos State on Friday.
Oyetola of the All Progressives Congress was declared as winner by the Independent National Electoral Commission at the end of Thursday’s re-run election in seven wards.
He polled a total of 255,505 votes to defeat his closest rival and candidate of the Peoples Democratic Party, Senator Ademola Adeleke, who polled 255,023 votes.
Tinubu said that the people of Osun State exercised their rights and chose the best candidate to drive development in the state.
He said: “The people of Osun, the state of Omoluabi, demonstrated their strong determination, they have good judgment, they exercised their rights to choose the best candidate necessary for developmental programmes in the state.
“When you look at those who were running, you have the best, the most brilliant, the most qualified, competent, calm and great candidate.
“That is what they have done to show that democracy is at work.
“Democracy is about the people and the people have equally exercised their right to be tolerant, patient, persevere and do what is necessary to develop the economy of the state.
“And you need the most competent person that will perform.
“In leadership, you need a thinker and a doer that must be present in the mind, body and soul.
“That person who will carry the responsibility of he state and I feel that Mr. Oyetola fits perfectly.”
Tinubu urged the people of Osun State to encourage and give maximum support to Oyetola.
He said: “The rest is for the people of Osun state to rally round and give him the necessary support and encourage him to do well following the legacy already built.
“He already has a blueprint for development agenda.”
On the APC presidential primary, the party’s National leader said the huge support from party faithful in Lagos State was a signal that it would emerge victorious in 2019.
Tinubu said: “Democracy is at work and we have managed the party till now.
”Here in Lagos, about 2.3 million people including myself, as I am standing before you supported and participated in voting for President Muhammadu Buhari.
“And I want to tell you that this has sent a tone or signal to what will come in February 2019.”
Meanwhile, Governor Akinwunmi Ambode of Lagos State and Musiliu Obanikoro, a former Minister of State for Defence, were also on ground during the visit.