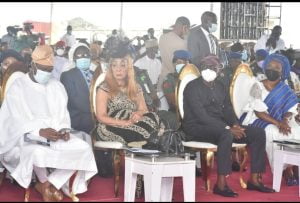 Tinubu said this during a Day of Tributes in honour of Late Kanu, organised by Lagos State Government in Ikeja on Wednesday.

The News Agency of Nigeria reports that Kanu, who died on January 13, aged 78 years, will be buried on Oct. 16 in his home state, Abia.

Late Kanu was appointed the former military administrator of Imo in 1976 and of Lagos from 1977 to 1978.

Tinubu, who was represented by the former Deputy Governor of Lagos State, Otunba Femi Pedro, said the deceased was a patriot and a progressive who provided meaningful ideas to advance historic struggle.

He was a rare breed in his consistent and unwavering commitment to social justice, democracy and workable federalism in Nigeria.

“Late Admiral Kanu was a Lagosian, true Nigerian nationalist in the very true sense of that phrase who demonstrated true belief and interest in the progress and development of the state,” he said.

Similarly, the Chief of Naval Staff, Rear Admiral Awwal Gambo, said late Kanu was a zealous, selfless and a lover of humanity.

Gambo, who was represented by the Flag Officer Commanding Western Naval Command, Rear Admiral Jason Gbassa, said the late former administrator contributed immensely to the transformation of the Nigeria Navy, saying that the “Nigeria Navy will surely miss him.

“On behalf of the Chief of Naval Staff and officers, we commiserate with his family and it is our hope that his soul will find solace in the bosom of the lord,” he said

Also speaking, on behalf of Civil Society Groups, Comrade Linus Okoroji described late Kanu as a great leader and a leader of civil society groups who supported the June 12 Coalition.

He said Admiral Kanu had no enemy and no party line.

In his tribute, Chief Solomon Ogbonna, President of Ohaneze Indigbo in Lagos, said late Kanu was one of the most honest Igboman that does not segregate irrespective of religion or tribe.

NAN reports that the event was graced by the wife of the deceased,  Gladys Kanu, children, a host of top government functionaries, Military officers, corporate organizations and NADECO members,.

NAN reports that late Kanu was the Chieftain of National Democratic Coalition (NADECO), a pro-democracy movement which fought for the revalidation of the late Moshood Abiola’s annulled June 12, 1993, presidential mandate.