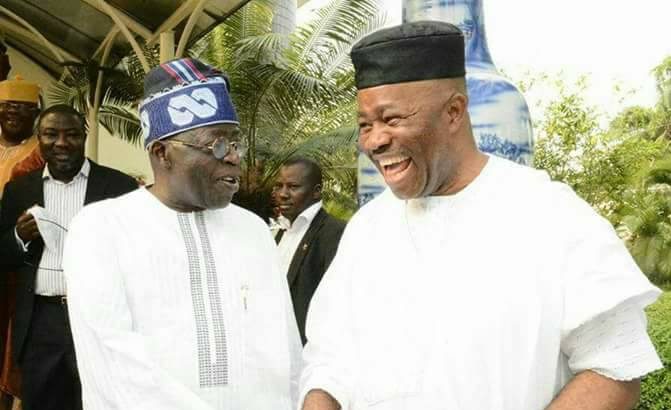 Contrary to an earlier report by The Eagle Online, the National Leader of the All Progressives Congress, Asiwaju Bola Ahmed Tinubu, and the Senate Minority Leader, Godswill Akpabio, did not meet on Saturday (today) in Lagos.
The Eagle Online had in a report titled: “Breaking: Akpabio visits Tinubu, to be formally received into APC by Osinbajo,” reported that Akpabio met with Tinubu in the APC’s leader’s home in Lagos State.
Though the aspect on the story on the reception of Akpabio by the Vice President stands, it has been learnt that Tinubu has been in Abuja almost all week.
The story, illustrated with a photograph of Akpabio and Tinubu during the birthday of the former Governor of Lagos State last year, also has it that Osinbajo will formally welcome Akpabio from the Peoples Democratic Party to the APC on August 8 at the Ikot Ekpene Stadium in Akwa Ibom State.
Among those to join Osinbajo in welcoming Akpabio to the APC is the Senior Special Assistant to President Muhammadu Buhari on National Assembly Matters (Senate), Senator Ita Enang.