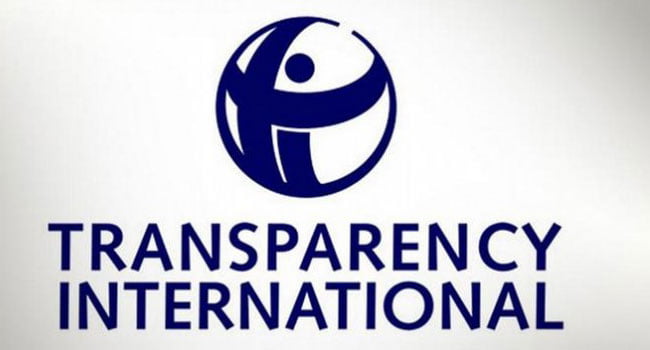 Transparency International has released its 2019 Corruption Perception Index, with Nigeria slipping in ranking.
The report was released on Thursday.
According to TI, Nigeria is second most corrupt country in West Africa.
So also did TI place Nigeria at 146 out of the 180 countries on the 2019 CPI.
Nigeria was named the second most corrupt country in West Africa after Guinea Bissau, which occupies number one.
Nigeria scored 26 per cent on the CPI.
Nigeria scored 27 out of 100 in TI’s 2018 report, but dropped by a point in 2019.
The report showed that despite the corruption war being championed by the Muhammadu Buhari Administration, Nigeria has failed to score higher than 28 per cent.
Nigeria scored 28 out of 100 in 2016 and 2017, but fell in 2018 to 27 and fell further to 26 in 2019.
In the latest report, Nigeria scored the same as Iran, Honduras, Guatemala, Bangladesh, Mozambique and Angola.
Out of 180 countries surveyed, Nigeria scored better than only 28.
They include Comoros, Cameroon, Central African Republic, Uzbekistan, Tajikistan, Madagascar, Zimbabwe, Eritrea, Nicaragua, Cambodia, Chad, Iraq, Burundi, Congo, Turkmenistan, Haiti, Democratic Republic of Congo, Libya, Guinea-Bissau, North Korea, Venezuela, Equatorial Guinea, Sudan, Afghanistan, Yemen, Syria, South Sudan and Somalia.
The TI survey measures public sector corruption in 180 countries.
The countries with the highest scores were New Zealand and Denmark, which both scored 87 out of 100.
Others that were highly placed include Finland (86), Switzerland (85), Singapore (85), Sweden (85), Norway (84), Netherlands (82), Luxembourg (80) and Germany (80).