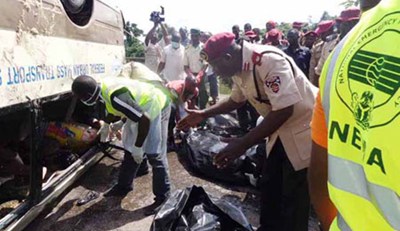 Two commercial motorcyclists and the passenger in an unregistered Totoya Camry car lost their lives in Osogbo, Osun State on Monday when the driver of the car lost control and crushed the motorcyclists.
According to eyewitness accounts, the accident happened at about 4:45pm at Heritage Junction on the Gbongon-Osogbo Road.
The accident was said to have been caused because of overspeeding by the driver, who lost control and rammed into a street light, causing the car to somersault.
When a correspondent of the News Agency of Nigeria visited the scene of the accident, a motorcycle could still be seen trapped under the car.
Two dead bodies were also seen, with their heads completely crushed.
Operatives of the Federal Road Service Commission were seen at the scene removing the dead bodies and the injured from the accident scene.
Other law enforcement agents were similarly on ground, controlling the crowd that gathered at the scene.
An official of the FRSC who spoke to NAN, said that five persons were involved in the accident and that two died on the spot, while another died at LAUTEC Teaching Hospital, Osogbo.
The official, who requested not to be named because he was not authorised to talk, said that one of the victims was in critical condition in hospital.
NAN learnt that the driver of the vehicle escaped after the accident.