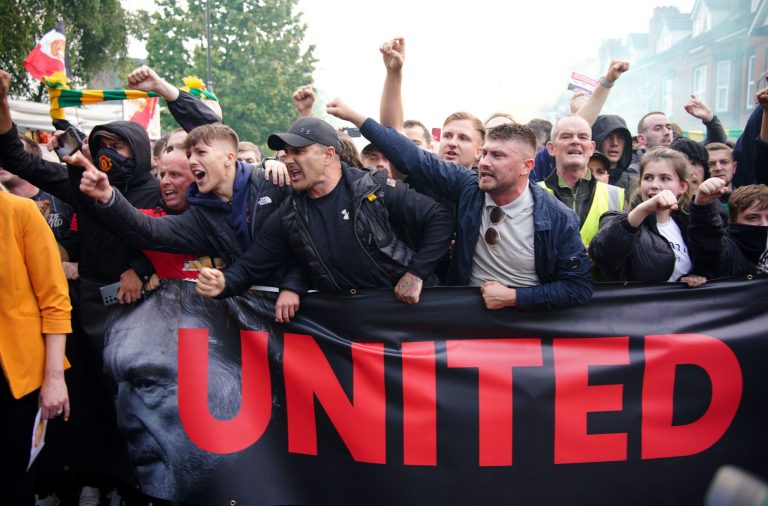 A total of 39 people have been sentenced over their roles in a protest against Manchester United’s owners the Glazer Family at Old Trafford last year.

The widely-criticised American owners, the Glazier Family, were the subject of several protests in the spring of 2021.

This followed their attempts to join the failed European Super League.

One protest at Old Trafford in May saw supporters break onto the Old Trafford pitch ahead of a proposed Premier League game with Liverpool, which had to be postponed.

Newly-released video footage from the protest also shows police officers being assaulted and having objects thrown in their direction as they attempted to quell the disruption.

Now, Greater Manchester Police have announced that 39 people have been handed sentences for their parts in the disorder, ranging from the ages of 15 to 52.

A total of 36 GMP officers are said to have been assaulted, and one required hospital treatment after sustaining a serious facial injury in the chaos.

Furthermore, security staff at the stadium were also targeted alongside stewards, while £70,000 worth of damage was reported inside Old Trafford.

A report from Sky Sports News states that two fans are also set to be sentenced at a later date, one appearing in court next month and the other in April of next year, and those convicted have also been hit with football banning orders.

A statement from Assistant Chief Constable Wasim Chaudhry read: “GMP’s Major Investigation Team launched an extensive investigation relating to the disorder, following up on a large number of enquiries and intelligence received from public appeals, as well as extensive CCTV analysis and identification work, to make sure these people were located and made to face the consequences of their appalling actions that day.

“Our officers put their lives on the line every day to keep the people of Greater Manchester safe, and it is absolutely shameful that anyone would willingly assault an emergency worker. We simply will not tolerate this happening.”

In the wake of Cristiano Ronaldo’s interview criticizing the club’s ownership and subsequent exit, the Glazer family have announced that they are open to selling the club in the near future.

The American family have been a part of Man United since Malcolm Glazer bought his first stake in the club in 2003, and they assumed full control of the club in the summer of 2025.

A host of big names have been linked with the Red Devils since the announcement, with Sir Jim Ratcliffe among those thought to be considering a takeover bid.

Saudi Arabia’s sports minister has also confirmed that the country’s government would support any bids for the 20-time English champions from private sector buyers.