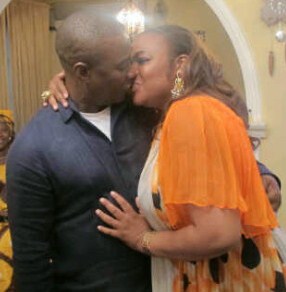 To say top fuji lord, King Wasiu Ayinde Marshal, has impregnated Island big girl, Titi Masha, is like stating what is obvious.
Weeks after the pregnancy scandal broke, it has been generating controversies from different quarters and neither King Wasiu Ayinde nor Titi Masha is yet to comment on the issue.
Akinbobola, popularly known as Gbenga Islander, a great fan of King De Ultimate, has accused Wasiu Ayinde of betrayal by putting his fiancée in family way despite the strong relationship that exits between them.
Gbenga Islander frequents K One’s shows with Masha since 2001 and immediately Wasiu saw the tall and well endowed mother of one, he was hooked. They got to know themselves and a relationship developed thereafter. Gbenga did not know that the relationship had started years ago. It was the pregnancy tale exposed the well kept and nurtured affair.
Though family and friends have kicked against the union because Wasiu still have wife and kids in his base in Canada and Titi Masha, according to our findings, has also betrayed her sister’s trust by dating her ex hubby. Shalewa, who is a niece to Titi, was previously married to K1 with kids before the relationship crashed like badly arraigned cards.
However, it would be recalled that a couple of years ago, Titi was romantically linked with popular fuji musician, Wasiu Alabi Pasuma. The story was even fuelled in a report in the media then that the duo had something to do together. But in a swift reaction, Titi denied the allegation that she only saw the fuji musician once in her life at a party and never talked to him as they had no meeting point at all. Those who should know disclosed that her several other exploits in sex romp with popular people could be true after all, because the Lagos born lady of style, who owns a shop at commercial Adeniran Ogunsanya Drive, Surulere, Lagos, lives alone in a big mansion in Lekki with her parents while her husband resides abroad.
A close pal to this young but very rich lady, disclosed to The Eagle Online that Titi is a lover of pure gold, which she adorns always. “She can never be caught dead in costume jewelry,” the source concluded.