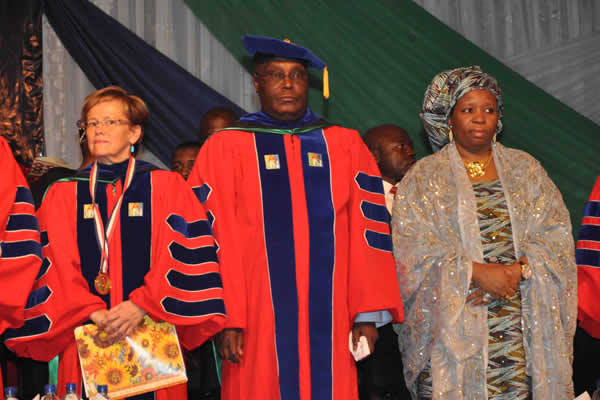 The American University of Nigeria, a private owned and international university, tucked inside the city of Yola, the Adamawa State capital, has graduated 280 students at its 5th Commencement Ceremony.

The Class of 2013 graduated at an elaborate ceremony attended by the cream of the AUN community, government officials, businessmen, traditional leaders, parents and guardians, who came in their hundreds from across Nigeria and other African countries to witness the glorious day of their children.

The ceremony quickly became a celebration of all efforts that individuals and organizations have made in support of the university.

The excellence of graduating students, accomplishments of faculties, achievements of staff, exemplary partnerships with corporations, service to the community, philanthropic gifts and many other forms of goodwill towards and from the AUN were honoured at the event.

The ceremony, which lasted for four days, had a line-up of organized eventful activities ranging from Honors of Society Dinner, to Class of 2013 night party dinner, tour of ACIT, Abti Printing Press, Senior Awards Ceremony and Conferral of Honorary Degrees on distinguished members of the  society.

At this year’s convocation, 280 students graduated from various departments of the university.

Other best graduating students of the various faculties were also honored.

While Halima Sogbesan won the award category in the Faculty of Information Technology & Computing, the Corporate Award For Academic Excellence category went to Raliat Alabi of the Faculty of School of Arts & Sciences.

Parents of the graduating students were not left out of the joyous occasion.

Speaking with The Eagle Online, Dehinde Sogbesan, the father of the overall best graduating student, Halima Olajumoke Sogbesan, said: “I’m proud of her.

“This is not the first time Halima will be doing this.

“In her secondary school, she was overall best student in her school.

“I’m so happy that she did it again at AUN.

“All the gratitude and honour to Allah to have done this for me.”

The ceremony could not have ended in a better way as the 5th Commencement ceremony attracted the who is who in the society such as Alhaji Ahmed Joda, the Chairman of the Board of Trustees of AUN; the founder, Alhaji Atiku Abubakar; his wife, Ruqayya; Prof. Pat Utomi; the President of the AUN, Dr. Margee Ensign; the President of the European Union; the Chief Executive Officer of Medview Airline, Alhaji Mannir Bankole; and several others.