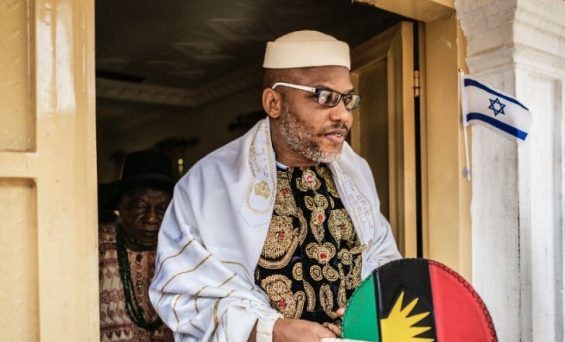 The Indigenous People of Biafra has raised the alarm over alleged plot by terrorists who attacked the Medium Security Correctional Centre in Kuje, Abuja to attack its leader, Mazi Nnamdi Kanu, in the custody of the Department of State Services.

The spokesman of IPOB, Emma Powerful, raised the alarm in a statement he issued on Sunday on the alleged plot.

Powerful said the attack on Kuje prison was a prelude to a plan by the terrorists to kill Kanu in the DSS detention facility in Abuja.

He said since President Muhammadu Buhari and the All Progressives Congress came into power in Nigeria, there had been several jail breaks in the country, listing a number of them.

The statement said: “We, the global movement and family of the Indigenous People of Biafra, under the command and leadership of our great leader, Mazi Nnamdi Kanu, wish to reiterate our earlier emphasis on the intended make-believe plan to attack the DSS facility in Abuja by already drawn-up stunt actors (the DSS agents) at the very location where our leader, Mazi Nnamdi, is incarcerated having successfully tested such plans with Kuje Prisons without consequences.

“The plan was hatched by the Nigerian Government with strategic and tactical input of the UK Government. The reason for the UK and Nigeria’s alliance in such cowardice and evil plan is due to their disdain for allowing indigenous people across the world to enjoy freedom such as the British is enjoying Brexit from the European Union.

“This alliance perceives Mazi Nnamdi Kanu as a stumbling block for their modern-day oppressive tendencies and, therefore, wants him dead, having tried several unsuccessful attempts in Afaraukwu, London, USA, Kenya, and even in Abuja for which Chukwu Okike Abiama had always proven himself. The IPOB intelligence unit, the M. Branch, intercepted this purported plan by Britain and Nigeria to stop Biafra agitation and freedom from Nigeria, and Nigeria and its allies have decided to replicate what they did in 1967-1970 and are still on the way to do it again against the innocent citizens of Biafra. The world should take note.

“The world should take note because if anything untoward happens to our leader, Mazi Nnamdi Kanu in the DSS custody, nobody should blame IPOB for inevitable and uncontrollable boundless calamitous consequences that would befall anyone. Know that your silence hardens our conscience towards the pursuit of this great nation called Biafra. IPOB needs an unconditional release of our leader because there is no prison in the south that is safe for him. Therefore, we still need him released unconditionally to avoid dangerous terms IPOB may take against Nigeria.

“There are many jailbreaks in Nigeria since Buhari and his APC party took over power and nothing was done.The number of prison breaks was so alarming, no country in the world experienced these kind of jailbreaks in history.

“All these prison breaks and Buhari and his government never found out the reasons or brought the attackers or perpetrators to face the law. Therefore, we want them to release Mazi Nnamdi Kanu unconditionally because his life in the DSS custody is not safe and they will attack there and blame it on bandits and terrorists.

“We urge the British Government to jettison pretense and direct the Nigerian Government to release Nnamdi Kanu unconditionally or send him back to the UK where he lives, or for him to return to Amechi Mbazuluike or Professor George Obiozor, for his safety.”