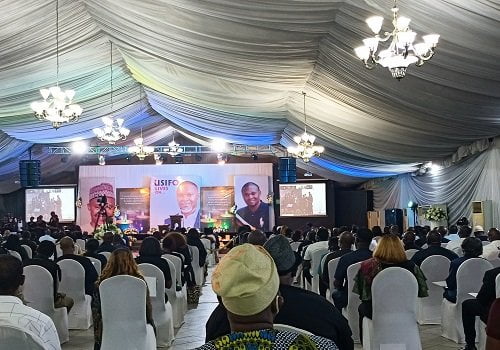 It was a teary and solemn moment as family, friends, associates and other sympathisers gathered for the Service of songs in honour of the late CEO Super TV, Micheal Ataga.

Ataga was reportedly murdered in Lekki area of Lagos just few days to his 50th birthday.

Sifo, as he was called by family and close associates, was born June 17, 1971 and founded Super TV.

The service of song is part of his funeral programme.

Eulogies and tributes poured from attendees who spoke of Ataga’s attributes at the event.

“God knows he did not deserve what those people did to him. My heart bleeds to him anytime I remember. He was generous to a fault.

“It took death for me to know how loved he was. He has been robbed of the joy of seeing a project he spent seven years working on.

“He has been denied the joy of seeing his children grow up, go to the university, get married and make him a grandfather.

“These are wishes of every parent. His love for his children cannot be quantified. No way!”

She said her son was so caring that she would hesitate to tell him that she was sickly.

His wife, Brenda, who reminisced the great time they shared, described him as a man after God’s heart and a backbone who supported the family.

“Sifo you had a heart of gold, a pure heart, you were kind, patient, humble, fun, loving. You could intrigue a room for hours. Such positive energy.

“Finding out of your demise was the worst news imaginable. My mind had raced through all the possibilities of where you were and what could have happened but death, death wasn’t an option.

“The girls and I were looking forward to seeing you, to celebrate your milestone.

“I had imagined how surprised you would be when you walked in to see a place set up for you. I had imagined the infectious smile.

“Now, I’m yet to comprehend the star k reality that your life was cut short in your prime, at a renaissance of all you had toiled for. .. I’m lost for words…

The two daughters — Eboselulu and Emoata- described their late father as an amazing man who always listened to their problems.

He will be laid to rest tomorrow.