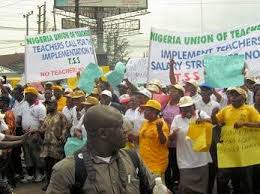 Former Governor of Benue State, Senator Gorge Akume, has slammed the incumbent Governor of the state, Gabriel Suswan, for not taking necessary action to ensure that striking primary school teachers in the state go back to class.
The primary school teachers’ grievances stemmed from the state government’s inability to implement the N18,000 National Minimum Wage, which other primary school teachers in other states have been enjoying.
Akume described the eight months old strike of public primary schools in the state popularly referred to as the food basket of the nation as unfortunate, saying that chieftains of Peoples Democratic Party in the state should advice Suswan on what to do.
In an interview with journalists, the Minority leader of the Senate lambasted the governor for not doing what is necessary to get the teachers back to the classrooms.
Akume, who expressed dissatisfaction with state of education in Benue State. called on the leadership of the PDP in the state to talk to governor in order to get teachers back to the class.
According to him: “It is unfortunate that this happening in Benue State.
“Chieftains of PDP should talk to Governor Suswan to get teachers back to class.
“The governor should know that he is a product of public primary school.
“I sympathize with public state of education in the state.
“Not long ago, the University lecturers in the state were on strike before the strike was called off.
“I am sure that there is provision in the law for primary education.”