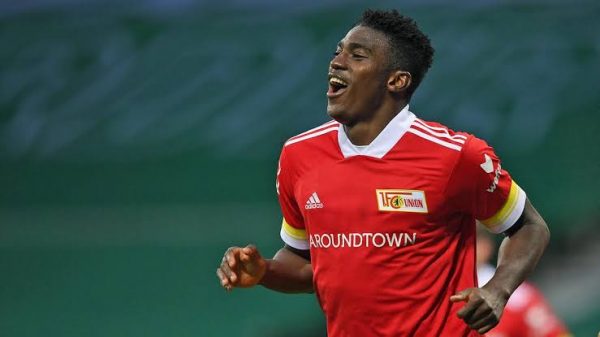 Nottingham Forest forward Taiwo Awoniyi has said he will be “very excited” to line up against his former side Liverpool when the two sides face each other in the Premier League for the first time in 23 years next month.

Awoniyi spent six years at Liverpool between 2015 and 2021 but his career at Anfield was largely spent out on loan as he was unable to gain a work permit after he signed for the Reds from Imperial Soccer Academy for a fee of £400,000.

Despite receiving a work permit last year after a fruitful spell in the Bundesliga with Union Berlin, the Nigerian departed Liverpool to join the German outfit on a full-time basis, with the Reds banking £6.5 million for a player who never kicked a ball for their first-team.

However, after an eye-catching 2021/22 season in the German top-flight, where he bagged 15 goals in 31 appearances, Awoniyi sealed a move to free-spending Nottingham Forest for £17.5 million,, which capped a remarkable couple of years for the striker.

But despite his chances at Anfield being largely limited due to mitigating factors of being unable to attain a work permit, Awoniyi – who scored on his home debut for Forest – is excited to play against his former employers when the two sides meet at the City Ground on October 22.

“For me to be honest, I’ll say Liverpool because I’ve been there before,” said Awoniyi when asked by SuperSportTV who he is most looking forward to facing this campaign. “I know some of the players there. I’d be very excited to play against them.”

Of course, Liverpool defeated Steve Cooper’s side en route to last season’s FA Cup triumph, winning in the quarter-final thanks to a solitary Diogo Jota goal late in the second half.

One player the Reds had in their squad during their run to Wembley glory was Sadio Mane, who departed Anfield after six years earlier this summer to move onto pastures new at Bayern Munich – someone the Nigerian-born striker had a close relationship with during his time at Liverpool.

“Players I’d say, but he left already, I’ll say, Sadio Mane,” added Awoniyi when considering which players he is looking forward to playing against. “The rest is just not so close because I didn’t get the opportunity to play in the first team quite a lot of times.”