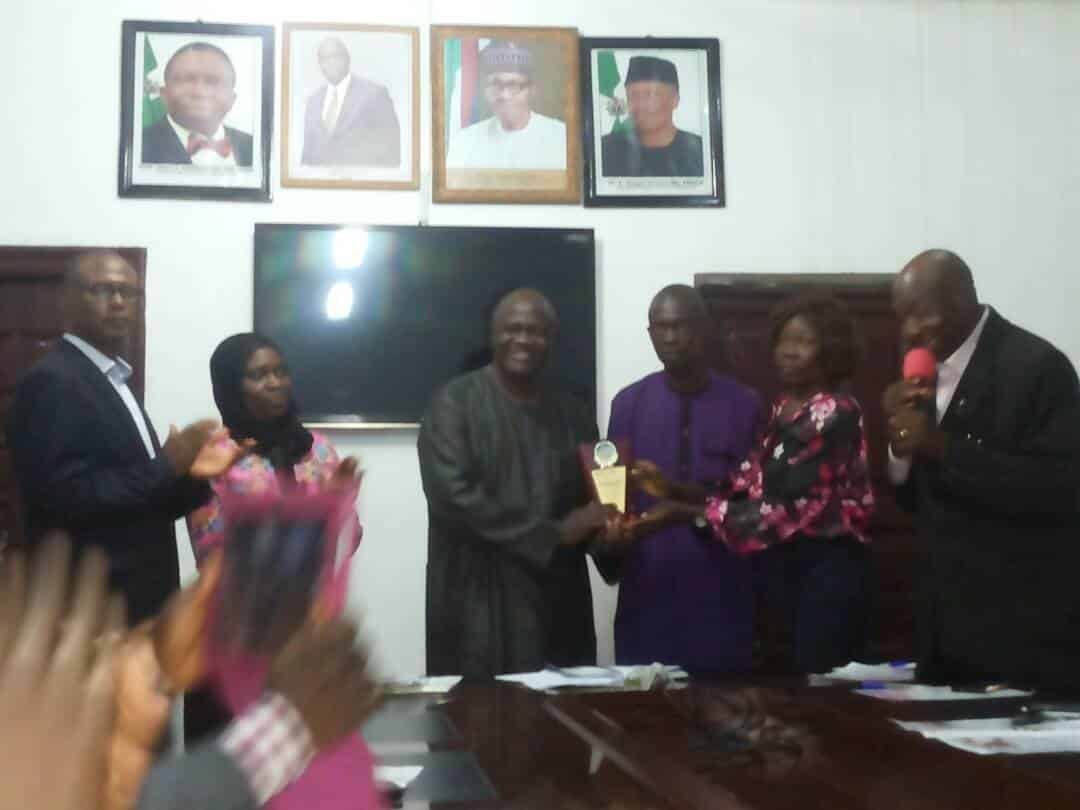 Share
Facebook Twitter LinkedIn Pinterest Email
The Chief Medical Director of the University of Ilorin Teaching Hospital, Prof. A.W.O. has said the hospital within the last nine months have carried out 275 free surgeries for indigent patients of the hospital.
Besides, Olatinwo promised adequate supports for the hospital’s football team, Injectors, currently plying its trade in the Nationwide League, to gain promotion to the nation’s Premier League in the shortest possible time.
The UITH  boss while listing the catalogue of breakthrough achieved so far under his leadership such as the first Renal Transplantation, the first Open Heart Surgeries, the first In Vitro Fertilisation clinic among others at highly subsidized rates, said he owed the successes to the dedication to duties of all categories of workers of the hospital.
These formed the fulcrum of Olatinwo’s reactions to the double honours conferred on him recently by the national body of the Sports Writers Association of Nigeria at a colourful event held at the hospital premises.
For now, the UITH boss is a Patron of the highest sports’ writers body in Nigeria, just as he got an honour recognising him as the best Chief Executive sports promoter in the country.
The SWAN awards, according to the Kwara State Chairman of the association, Abdulwaheed Bibire, remained credible honours, noting that the body would not haphazardly confer such on undeserving personality.
Bibire, who led a team of SWAN executives (National and State) to the event, said since the emergence of Olatinwo as the CMD of the UITH, the status of Injectors has been boosted just as he described the monthly “Keep Fit Exercise” of all the staff of the hospital as pioneered by the awardee as second to none in any government’s owned institutions or parastatals in Nigeria.
The event, which holds every second Saturday of the month at the mainbowl of the Kwara State Sports Complex, Ilorin, is complemented with health talks and free medical tests for all the staff, their relatives and friends.
Olatinwo, while overtly expressing his joy with the recognitions accorded his “modest” contributions to the phenomenal growth of the hospital by the SWAN, disclosed how lucky he was working with the best crops of personnel anywhere in the world.
Recognising the contributions of some philanthropists of the hospital for their enormous donations to the health institution, Yusuf Olaolu Ali (fully equipped trauma centre) and Oluwole  Awotusin (fully equipped and an ultra modern Emergency Paediatric Ward), canvassed more of such kind gestures from other privileged Nigerians and friends of the hospital.
In his votes of thanks, the Director Administration of the UITH, David Odaibo, captioned the awards as “a milestone” in the hospital’s history.
For Odaibo: “We are happy to be having a visionary leader and a master of diplomacy at this time.
“He has reaped what he sowed by these great honours conferred on him by God through the SWAN.”
Chief Medical Director Sports Writers Association of Nigeria University of Ilorin Teaching Hospital
Share. Facebook Twitter Pinterest LinkedIn Tumblr Email