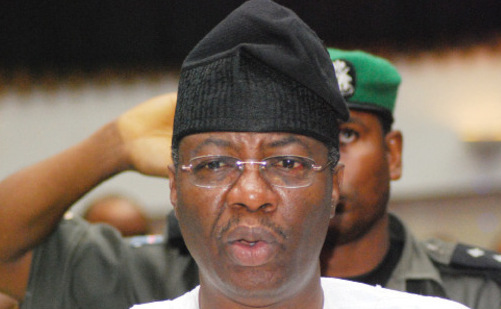 The Sports Writers Association of Nigeria on Thursday in Sagamu, Ogun State formally decorated a former Governor of Ogun State, Otunba Gbenga Daniel, as its National Patron.
The investiture of Daniel coincided with his 61st birthday and his formal inauguration was done by the SWAN National President, Honour Sirawoo, before hundreds of guests at Daniel’s Asoludero Court residence.
A statement by SWAN on Friday in Abuja said Sirawoo was accompanied by several national and state SWAN officials during the ceremony.
While speaking, Sirawoo, who had in October pronounced Daniel a National Patron, said his choice was on merit, as it was a unanimous decision of the Association’s National Executive Council.
He said: “The decision was reached after we considered his performances in the sports sector as the Governor of Ogun State between 2003 and 2011, with a great number of other laudable projects recorded by his administration.
“The recipient did not solicit for this award, but it was bestowed on him for other leaders to emulate.
“OGD has done so much for the state in job-creation, which includes the provision of sports facilities across the state to provide employment for the citizens, particularly the youths.
“It was the decision of the SWAN NEC to appreciate him, so that others would emulate him.”
Sirawoo then used the opportunity to dismiss as untrue speculations that there was crisis within the Association, saying SWAN remains one united family.
In his remarks, Daniel pledged to give adequate support to the Association at all times and expressed appreciation at his being considered fit for the award.
“Let me thank you from the bottom of my heart on this award, and be rest assured that I will contribute positively to the growth of the Association,” he said.
Daniel added that he was proud to be associated with the sports writing body and encouraged the members to be up and doing in promoting sports positively across the globe.
Daniel during his eight years in office as Ogun State Governor brought about unprecedented sports development.
He ensured that the state had world class sports facilities, including four FIFA standard stadiums, leading to the hosting of some of the 2009 FIFA Under-17 World Cup matches in Ijebu-Ode.
Daniel also ensured the state hosted the 2006 National Sports Festival successfully and as scheduled, leading to an unprecedented generation of profits from the Festival.