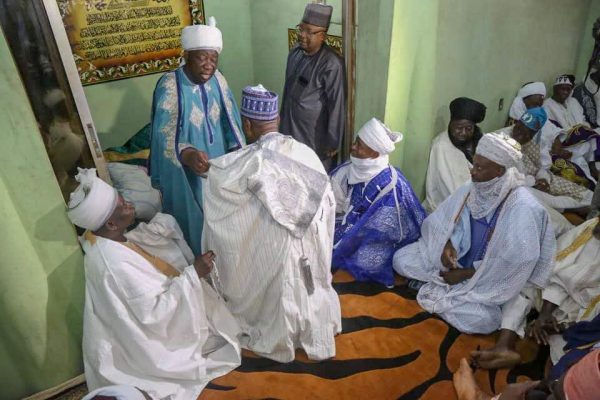 Share
Facebook Twitter LinkedIn Pinterest Email
The President of the Senate, Dr. Abubakar Bukola Saraki, has been conferred with the traditional title of “Wazirin Ilorin” by the Emir of Ilorin, Alhaji Ibrahim Sulu-Gambari, at a Special Thanksgiving Prayer Session organized by the Emirate on the recent victory of Saraki at the Supreme Court on his case with the Federal Government over allegations of false asset declaration.
By the elevation, Saraki, who is also Turakin Ilorin, becomes the fourth Waziri Garin, succeeding his father, Dr. Olusola Saraki, who held the title until his demise in 2012.
Announcing  the elevation, the Emir said it was in acknowledgement of the Senate president’s passion for the development of not only the Emirate but the whole of Kwara State as well as his political exploits that have brought fame to the state, particularly Ilorin Emirate.
Sulu-Gambari said: “We are excited by your political exploits because of late you have become the beautiful bride whom politicians across the board are beckoning to be in their camps.
“This is a show of recognition of your worth and achievements as a politician.
“We are very proud of you.
“It is from here that we prayed for you to become governor, it was here that we prayed for you to become senator and it was from here that we prayed for you to become Senate President and all these came to reality.
“Today, we are also praying from here that God will elevate you beyond your present position.”
The Emir noted that he was seated on a very special seat inherited from his forefathers and has their authority to conduct the programme.
He also described the event as typical of Ilorin, saying unlike some communities that celebrate victories such as has come to Saraki with parties, the Emirate believes in the efficacy of coming together to the inner chamber of the palace to offer such special prayers.
Sulu-Gambari immediately decorated Saraki with the regalia of his new title and ordered him to wear it throughout the day.
During the prayer, the Imam of Ilorin, Sheikh Abdullahi AbdulHameed, noted that Saraki survived his recent ordeal by the power of prayers offered from the Emirate.
AbdulHameed also led participants to offer prayers for divine guidance for Saraki as he makes vital decisions over his political future.
“We pray that his decision which is being awaited and which has made him the beautiful bride today would be successful,” he said.
Responding to the elevation, an obviously elated Saraki, who was beaming with smiles, said the development took him by surprise.
In a post on his Facebook page, Saraki said: “This morning, I went to the Palace of the Emir of Ilorin for a Thanksgiving Prayer Session organized by the Emirate to thank Allah for my recent victory at the Supreme Court.
“The Holy Quran teaches us that those who give thanks to Allah for His favours will always get more. Alhamdulilahi Robil Al-amin. As the prayer session was coming to an end, the Emir, Alhaji Ibrahim Sulu-Gambari, surprised all of us by announcing my elevation to the traditional title of Wazirin Ilorin.
“The position of Wazirin Ilorin was last occupied by my late father, Dr. Abubakar Olusola Saraki. May the Almighty Allah (SWT) retain for him a place in Aljannah Al-Firdaus. Alhamdulillahi, Alhamdulillahi, Alhamdulilahi Robil Al-amin.”
Post Views: 0
Abubakar Bukola Saraki Ibrahim Sulu-Gambari Olusola Saraki Turakin Ilorin Waziri Garin
Share. Facebook Twitter Pinterest LinkedIn Tumblr Email