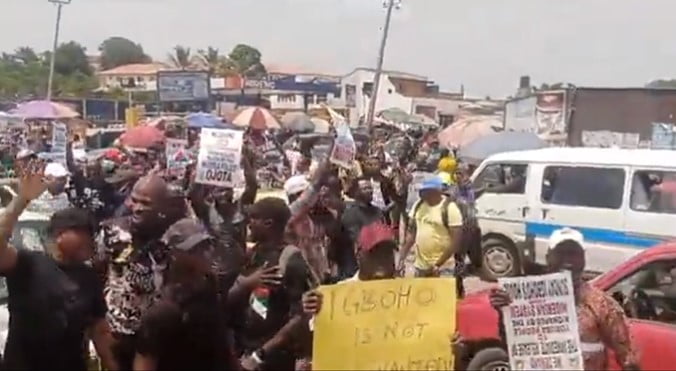 Yoruba Nation agitators have stormed the palace of the Olubadan of Ibadanland, Oba Saliu Adetunji, giving the Federal Government ultimatum on a number of issues on issues concerning Sunday Adeyemo, also known as Sunday Igboho.

The protest was part of the agitation over the invasion of Igboho’s home by operatives of the Department of State Services.

The protest, which started from Igboho’s residence in Soka area of Ibadan, the Oyo State capital, saw the peaceful protesters march through several streets until they reached the palace of Oba Adetunji.

The foremost traditional ruler, who was said to have been roused from his sleep, spoke to the protesters through one of his chiefs.

But before Oba Adetunji spoke, the leader of the protesters had made a list of their demands.

Top on it was the release of those arrested in Igboho’s house when the DSS visited.

The spokesman said those arrested committed no wrong.

They equally demanded for compensation for Igboho over the damages to his properties, including vehicles and the house.

They then sought for public apology from the Federal Government.

They said if the conditions were not met in seven days, they will strike, adding that they no longer had any fear for security operatives.

Responding, Oba Adetunji said he would pass on their demands to the government.

He, however, appealed for calm.