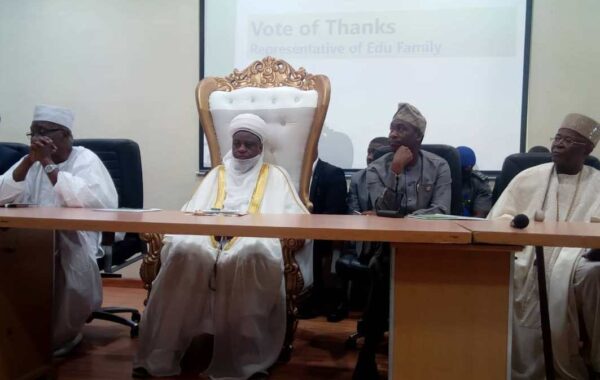 The Sultan of Sokoto, Muhammad Sa’ad Abubakar, has said social-economic pressure, rather than religion, often causes farmers and herders’ clashes in the country.
The Sultan spoke in Lagos as the Guest Speaker at the joint 18th S.L. Edu Annual Memorial and Nigerian Conservation Foundation 2020 lecture held in Lagos State.
He said those reading ethnic, religious and political colourations to the crisis were doing the nation a disservice.
The News Agency of Nigeria reports that the topic of the lecture was: “The Role of Traditional Leaders in Protecting and Restoring the Nigerian Environment.”
The Sultan also said the shrinking Lake Chad and its attendant desertification would further spur the southward migration of the herders in search of pasture.
Abubakar said the reduction in the availability of needed resources by herders had prompted incessant frictions between farmers and herders.
He said in the process, farmers’ crops had been destroyed by the herders, who were in search of green pasture and water for their animals.
He said: “In the real sense, both the herders and farmers have the right to live and do their businesses.
“As a people, we should find a meeting point to resolve this issue and move ahead.
“The resort to different parochial views on it is unacceptable and it must stop.”
The Sultan reminded Nigerians that January 15, 2020 marked the 50th year when the Civil War ended.
Abubakar pleaded with both the leaders and followers not to do anything that would make Nigerians to experience such again.
He said in human society so far, “there is a scarcity of everything and man will continue to struggle for scarce resources.
“It is then the duty of the state to come in between and fill the gap with good polices.”
Sultan Abubakar said the government should factor in the rising number of population through an increase in food production in order to strike a balance and avoid social crisis.
He said: “The situation that we find ourselves in Africa is one that we house the greater number of Africans but with have little living land.
“As a younger person in Lagos, I used to relish the Bar Beach as a fun seeker with my friends some 30 years ago.
“But the same social pressure has made the natural beach to give way to other structures.”
Abubakar thanked Governor Nyesom Wike of Rivers State for donating N100 million to the children of the Nigerian fallen heroes.
He called on other Nigerians to emulate the governor’s kind gesture of taking care of those that the fallen heroes had left behind.
He added that the traditional institution had been in existence before the amalgamation of Nigeria in 1914.
He said: “Therefore, government should listen to the traditional institution in matters that concern the locals in order to avoid unnecessary friction.