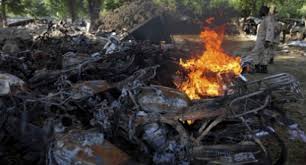 Share
Facebook Twitter LinkedIn Pinterest Email
The United Nations says bombers killed two people and wounded 11 others at a camp in Niger housing thousands of people who have fled Boko Haram violence in the first suicide attack in the region in a year.
The UNHCR said that two women entered the camp in Kabelawa, around 50km north of the border with Nigeria, and joined a group of young people before detonating suicide belts just before midnight on Wednesday.
The UN said: “The explosion killed two young inhabitants of the camp, a male and a female, as well as the two women. 11 others were injured, two seriously.”
Boko Haram launches frequent cross-border raids from its strongholds in northeastern Nigeria in its bid to carve out an Islamic caliphate, though most recent suicide attacks have targeted towns in northern Cameroon.
The group’s eight-year insurgency has killed more than 20,000 people in the Lake Chad region and displaced 2.7 million.
There are over 166,000 refugees living in Niger, as well as 127,000 internally displaced Nigeriens.
– NAN
Post Views: 0
Boko Harams Kabelawa Lake Chad nan Nigeria UNHCR United Nations
Share. Facebook Twitter Pinterest LinkedIn Tumblr Email