Suarez could be ruled out of World Cup after knee surgery 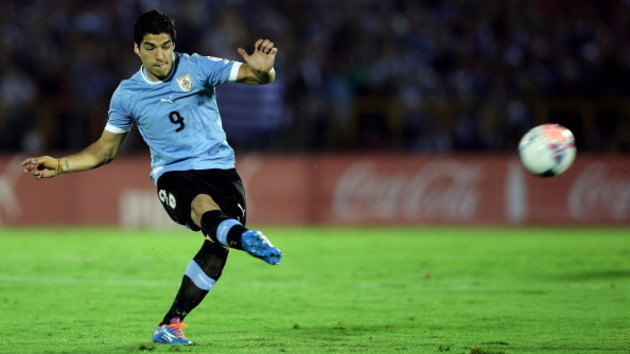 Suarez could be ruled out of World Cup after knee surgery
After early reports suggested that the Liverpool man will almost certainly be out for Uruguay’s opener, sources in Uruguay suggest he may well be fit in time for the World Cup opener, but nothing has been confirmed yet.
It was rumoured this morning that Luis Suarez has been all but ruled out of the World Cup after suffering a knee injury during Uruguay training and will undergo surgery today.
Suarez reportedly felt he had done something to his knee during training and it was later revealed that the European Golden Boot winner had suffered meniscus damage and will undergo surgery which normally keeps players out for around 4-6 weeks, meaning his participation in the early stages of the World Cup is unlikely.
Uruguay face England, Italy and Costa Rica in the group stages for the upcoming tournament in Brazil and their plans have surely been shattered by the news that arguably one of the greatest players in their history could be unfit in time to face England on the 19th June – four weeks from today.
They will turn to the likes of PSG striker Edinson Cavani and ex-Manchester United forward Diego Forlan to spearhead their attack, but could conceivably have Suarez back in time to take some part in the tournament.
The news will surely delight English fans as the tone of preparations has been somewhat dampened by the tough task Roy Hodgson’s men will face in trying to navigate their way out of what could be considered the group of death.
If the injury keeps him out, Suarez is just one of a number of international stars who will be missing for the World Cup, along with the likes of Falcao, Diego Costa, Theo Walcott and Christian Benteke.