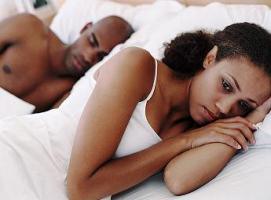 Wahala! Sex is a big issue between spouses. Do you guys recollect the story I told you a few years back when I was still with The Sun Newspapers?
It was in the University…our friend, known for sampling and dating pretty girls, suddenly dropped his current beauty queen of a babe and took up with a babe that even now, I preferred to call a nondescript person…worst, the new babe had K leg, blessed with enough yam tissue! You needed to see her in a dress…dogs go bark!
I’m not being rude, just factual.
You ought to see her ponmo lips and big sized teeth, yet our pal continued to die…if the babe asked him to bark like a big dog, you’d see him doing just that!
We couldn’t understand…and he refused to open up…until I cornered him one day…he said: “Julie, that babe can wind a guy in bed to die!”
You heard that? Sex! It’s always the sex!
Did you say some is juju?…don’t even go to that lane…wetin he dey do wey juju catch am?
I just don’t get why men who technically don’t want their wives…
Who treat their wives shabbily…even beat them sometimes…usually get worked up when she begins to show interest in another guy.
These men cheat on their wives, yet would have a cardiac attack when or if the little wife dares to do the same.
Talk of double standard!
What is good for the goose should jolly well be good for the gander!
I just can’t get why such men spend so much money on their mistresses, yet repeatedly use the mantra: “I don’t have money…I don’t have money…” at home with their wives and children.
Who has the right to his money?….the woman who had bore him kids and needs money to take care of them…or the one he is still banging outside the home front, who has nothing to gain or lose if anything happens to the idiot?
You’re the jury for this moment; please judge the case before you today!
I just don’t get why some men these days stupidly make their mistresses their next of kin…while their wives and children are still alive!
A true life story…is happening now… The guy has three kids and a lovely wife.
The reasons he took to having extramarital affair is yet unknown…but believe me, there are always reasons why they start extramarital affairs.
Some of the reasons are real, others imagined. The idea behind the reasons is to soothe and salve your conscience.
He started having affair…and like I said earlier, his wife is a million dollar in looks and shape compared with his mistress…
Nay! It’s not just by Anurika Onyelemelam that said it…everybody and anybody who had seen the wife and mistress, came up with the same verdict.
Yes, the wife fine pass o jare!
The point to this story is that recently, it was discovered that the bobo changed his next of kin in his business dealings and bank documents from his first son, to his mistress!
Phew! How dumb can a guy be? Apparently a million times mugu!
So if he suddenly drops his stupid head in death, while in action with his mistress, his wife caters for the kids with what?
God! How stupid can a guy get? I feel like spanking this guy!
Hum!…men! You know them…I know them…their thinking faculties…their senses…begins and ends with their one referee and two lines men buried inside their trousers!
When the referee and two lines men begin to act up at the sight of a new match, they tend to behave like fools!
I just don’t get why some of them insist they can’t eat only ogbono soup…
They get all turgid, with sinews standing on end with excitement just thinking of seeing their mistresses, than their wives…
I just don’t get why they feel they’ve given their wives everything, so the wife shouldn’t complain that they are dating somebody…
Show me a woman who would be happy to share her man’s manhood with another and I’ll show you…complete the statement yourself.
I just don’t get why they prefer to go to parties with their mistresses, while they would rather die than take their wives to such parties and clubs.
Many of them insist their wives’ boobs have gone saggy, thus they want boobs that are still standing stubborn and proud….thus they seek for a mistress who has what is missing or deflated in their wives.
They forget they are part of the reason their wives’ boobs is bowing down in defeat…they’ve suckled her boobs to total submission…and what about their kids…do we need to regale you nice folks with the sort of warfare those kids carried out on those breasts? It was a battle that even the boobs knew it stood no chance.
I just don’t get why the guy is always frowning and wearing a stern countenance, when he is in the car with his wife…and yet when he is in the same car with his mistress, he plays with her…fondles everything ‘fondle-able.’ What has the mistress got that the wife doesn’t?
Why he is so patient with his mistress…respects her…yet simply can’t stand his wife…loses patience with her…snaps at her at every point and treats her like a slime? I don’t get why when they begin to indulge in extramarital affairs they start acting funny at home…picking quarrel over any slightest issue.
They become mean to their wives…many even take to hitting their wives.
I just don’t get why once they begin these illicit affairs their wives become the witch in the unfolding love stories with their mistresses.
They tell their mistresses unbelievable, damaging stories about their wives.
How she was never his choice…how she trapped him into marrying him by getting pregnant…how he didn’t love or want her but had anyway, because his parents picked her out for him…how she’s horrid in bed…how she’s dirty…how….
Gosh! The lists and complaints are endless!

View other series:
Stupid things men who cheat on their wives do (1)