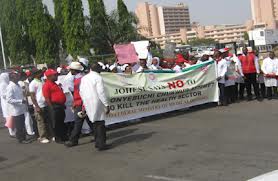 The Joint Health Sector Unions on Thursday said it was open to dialogue to resolve the nationwide indefinite strike embarked upon by health and medical workers.
The National Secretary of the union, Yusuf Badmus, told the News Agency of Nigeria in Abuja that the Federal Ministry of Health had yet to contact the union.
Badmus, who is also the Acting General-Secretary of the National Association of Nigeria Nurses and Midwives, said JOHESU was open to negotiations with stakeholders to end the crises facing the country’s health sector.
The various unions, including the Medical and Health Workers’ Union of Nigeria, National Association of Nurses and Midwives and Senior Staff Association of Universities, Teaching Hospitals, Research Institutions, are participating in the action.
Others are: the Non-Academic Staff Union of Educational and Associated Institutions, Nigerian Union of Pharmacists, Medical Technologists and Professions Allied to Medicine.
The workers began the industrial action on Wednesday.
They are demanding for improved working conditions and facilities at the various health facilities across the country.
Specifically, the agitation included non-skipping of salary grade level CONHESS 10; the National Health Bill; consultancy and specialist allowances; and call/shift duty and other professional allowances.
The scribe gave the assurance that if the vital demands made by the health workers were met, the strike could be called off.
He said: “We are hoping for negotiations.
“If we will be called, definitely we will be there.
“We do not call off strikes when what has been demanded is not achieved.
“The vital demands are that the Ministry of Health stopped our health workers from benefiting from what they long negotiated through collective bargaining.
“Number one is non-skipping of salary CONHESS 10; the promotion of health professional from CONHESS 14 to 15; consultancy and specialist allowances; and call/shift duty and other professional allowances.”
He said that the National Industrial Court had on July 22 ruled that the demands be implemented by the ministry.
He also listed other issues to be resolved by the ministry of health to include the implementation of the presidential committee’s report and the review of retirement age from 60 years to 65 years.
The other is to address acts of victimisation and discrimination of health workers.
The Nigeria Medical Association had, however, directed its members nationwide to continue providing normal services to save lives.