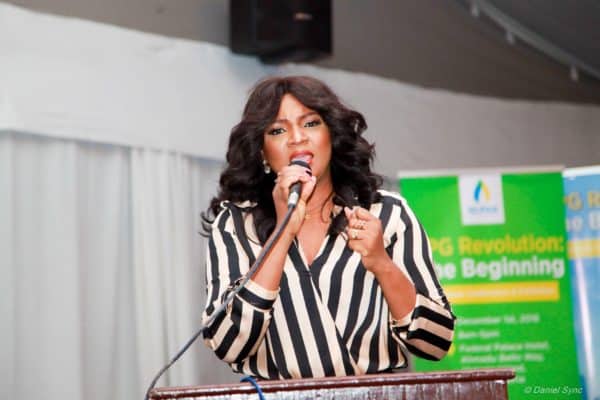 According to a statement by sponsors of the show, Globacom, Jalade-Ekeinde will be joined by two other Nigerians who are also making a difference in their fields of endeavour.

Jalade-Ekeinde, who is renowned for her acting skills, is also a singer and philanthropist.

She was in 2013 named in Time magazine’s 100 most influential people in the world alongside Michelle Obama, Beyoncé and Kate Middleton.

A year later, she was honoured by the Nigerian government as a Member of the Order of the Federal Republic for her contributions to the Nigerian film industry.

Thirty-eight-year-old Senbanjo is a former women and children’s rights attorney who dedicated his time to the campaign for the education of the girl-child in the northern part of Nigeria as well as the inclusion of women in mainstream national life.

He currently resides in the US where he has made a mark as a visual artist, musician and songwriter.

On the other hand, Alabi is known for his music videos and works  with Beyoncé, Wizkid, Tiwa Savage, Burna Boy, among others.

The programme will also be repeated in two installments of 15 minutes each at 6:45pm on Tuesday and Wednesday.