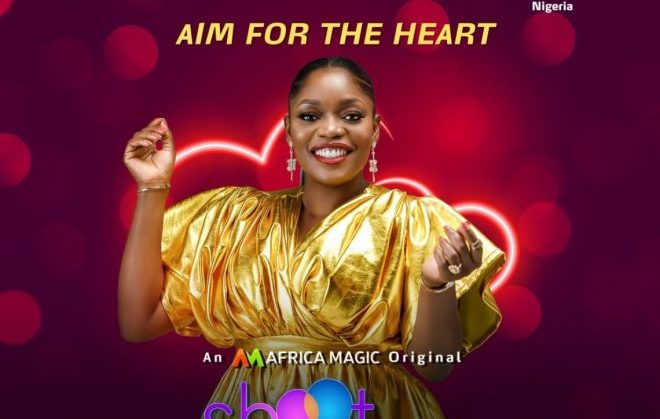 Love is hiding in every corner, waiting for someone to find it but leave it to Africa Magic’s Shoot Your Shot and the love fairy, Bisola Aiyeola, to help lovers find it.

In the third episode of Shoot Your Shot, Bisola helps a music artist, Stanley Okafor, woo his long-time crush, Onyinye Rivera. In his words, “like a beat completes a song”, he needs the Shoot Your Shot team’s help to approach his longtime crush to “complete his love story.”

Stanley fell in love with Onyinye after meeting and having a short chat with her at a mutual friend’s birthday party. In describing her, it was easy to guess that her beautiful smile was one of the first things that pulled our Romeo in. Bisola advised Stanley to express his love for her through a song, sign language and dance moves, which he did perfectly.

True to Stanley’s physical description of his love, Onyinye shared her beautiful smile with Bisola throughout their chat. She also shared her surprise when she discovered that a secret admirer had gone to romantic lengths to express his feelings.

Onyinye met her secret admirer, Stanley, in a colourful flower-enclosed space. To usher him in, Bisola had Onyinye close her eyes, and we got our first surprise when she couldn’t even remember meeting him.

While Stanley was very excited to meet his “Miss World”, Onyinye had forgotten when and where they had met. But leave it to our Romeo to walk her down memory lane sweetly.

After getting comfortable by talking about mundane stuff, Stanley expressed how her “beauty lights up his world” and how he ‘feels incomplete without her in it” and then popped the question, “Onyinye, will you be my girlfriend?”. Then,  the waiting game began.

At first, it seemed the beautiful Onyinye was not open to a relationship because she hardly knew him. After some emotional and honest love declarations from Stanley, she agreed to his request.  However, she made him promise that they would spend a lot of time getting to know each other.

Don’t miss the fourth episode next Sunday, July 10, on Africa Magic Showcase (DStv channel 151) at 5:30 pm. You can also follow the conversation with the hashtag #AMShootYourShot. Visit https://www.dstv.com/africamagic/en-ng/show/shoot-your-shot for more information.