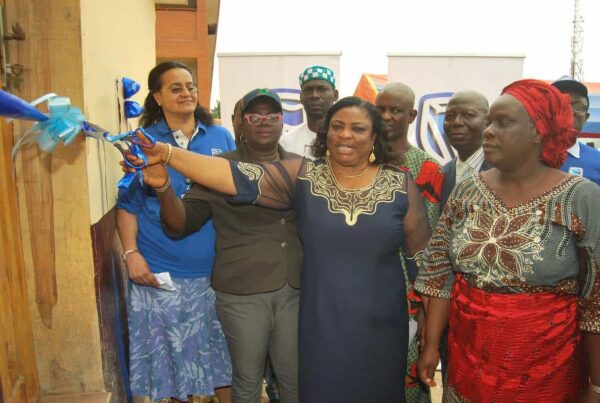 Stanbic IBTC Holdings Plc, a member of Standard Bank Group, has donated an ultra-modern lavatory to Abaranje Primary School in Alimosho Local Government Area of Lagos State.
The facility consists of a block of 12 modern toilets – 10 for the use of students and two for their teachers’ use.
It also includes a septic tank, borehole and overhead water tank.
Speaking during the hand over ceremony at the school premises, Angela Omo-Dare, Head, Legal Services of Stanbic IBTC, said the donation was in line with the company’s Corporate Social Initiatives.
Giving a background to the project, Omo-Dare stated that the Legal Services Department of Stanbic IBTC decided to undertake a CSI initiative that would benefit a public primary school and also address a health challenge.
She said: “Some members of the team were charged with finding a suitable project.
“When they returned, they spoke of a school where 800 children were sharing two pit latrines.
“The team was unanimous in its belief that this project was the most deserving of all the interventionist measures we considered.
“The team was determined that the children of Abaranje Primary School II should have access to modern toilets.”
Omo-Dare stated that the CSI project was funded by staff of the Legal Services Department of Stanbic IBTC, with contributions from their friends and family members.
She added that Stanbic IBTC matched the funds raised by the Legal Services Department, which enabled the completion of the project.
Urging other corporate organisations to emulate Stanbic IBTC’s initiative, she stated: “We are grateful that we have been given the opportunity to contribute towards the comfort and health of young Nigerians.
“We received much joy from the evolution of this project and a sense of pride from its completion.
“It emphasizes Stanbic IBTC’s core value of Teamwork.”
In her welcome remarks, Oluwabunmi Morenikeji Oteju, a Director in the State Universal Basic Education Board of Lagos State, thanked Stanbic IBTC for donating the toilet facilities and for initiating similar CSI initiatives across primary schools in Lagos State.
Oteju said: “I want to say a very big thank you for building this befitting structure for the children because they are the future leaders.
“I am also aware that you have several projects relating to provision of benches and tables for children in our primary schools, building/ renovating of libraries and so much more.
“There are over 1,016 primary schools in Lagos and the government alone cannot cater to all their needs.
“A lot of stakeholders have to come in to support and Stanbic IBTC is part of the organisations offering support. Projects like these make the learning environment more conducive and the students can learn better under such conditions.”
Oteju further pledged that the facilities provided by Stanbic IBTC would be put to effective use, assuring that the infrastructure would be properly maintained.
Elizabeth Ogunmola Adebola, the Head Teacher, Abaranje Primary School II, expressed gratitude to the management of Stanbic IBTC.
Adebola disclosed that the school had been sharing a block of two toilets with another school when its pit toilet got destroyed three years ago.
She said: “We thank the Legal Department of Stanbic IBTC Holdings for bringing this project to this school.
“In fact, we were at a point where we didn’t know what to do any longer.
“When members of the Legal Services Department of Stanbic IBTC came, we were very happy when they said that they wanted to build a block of toilets for us.
“We are thankful for this beautiful toilet facility that has been provided for our pupils so that they can have a taste of good living.”
Stanbic IBTC is a Nigerian company which has its roots in Investment Banking and Trust Company Plc, formed on February 2, 1989, with Atedo Peterside as the first Chief Executive.
The company has since evolved into a full-service financial institution with nine subsidiaries all headed by Nigerians.
Stanbic IBTC Holdings Plc has an estimated staff strength of approximately 5,000, 99.9 per cent of whom are Nigerians.
Additionally, eight of Stanbic IBTC Holdings PLC’s 10-member board are Nigerians.