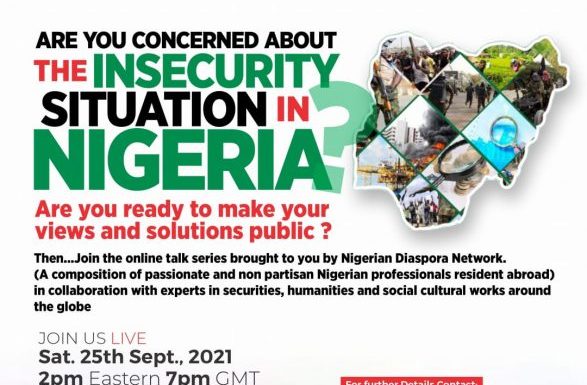 Col. Nelson Hambolu (rtd.) says the current security challenges in Nigeria cannot be unconnected to some socioeconomic problems the nation is faced with.

He stated this, Saturday night, during a zoom meeting organised by the Nigeria Diaspora Network (NDN), the United State (US) chapter, and monitored by newsmen in Abuja.

Hambolu, who retired in 1997 after 24 years in the Nigerian Army, said the genesis of banditry in the country needed to be unravelled before the best approach to end the menace could be activated.

The expert in forensic science investigation said answers would be provided to various questions as to why the challenge had become an uphill task as soon as socioeconomic factors were being addressed.

“To me, some of these questions are not new. These are problems that started very little because a stitch in time saves nine.

“Poverty, lack of jobs and so on are some of the reasons for all these banditry, kidnapping, terrorism, in our country. There are some socioeconomic problems here.

“The question is, what has the government done to solve unemployment?

“Anytime I go back to Nigeria, I feel sad seeing children who ought to be in schools hawking on our streets in Lagos, in the north, etc.

“We cannot talk about banditry without talking about unemployment and poverty,” he said.

He advised government at all levels to strive to create conducive environment for private sector operators to drive the country’s economy.

Hambolu also said that rivalry among the security agencies was another contributory factor to the prolonged battle against insecurity in the country.

“Are our security agencies working in synergy?” he asked.

He said to stamp out the problem, people in the grassroots must be carried along.

According to him, these are people who know who is who in our localities.

“We should not be reactive, rather, we should be proactive,” he added.

Prof. Albert Ayeni of Rutgers State University, New Jersey, said it was disheartening that some of the countries Nigeria used to be ahead of, including Singapore, Malaysia, Indonesia, etc, are, today, far ahead of the country.

He said the current security challenge was a buildup of bad leadership of past governments.

On his part, President, Nigerian Diaspora Organisation (NIDO) in New Jersey, Kareem Bello, said to combat the challenge, all hands must be on deck.

Bello, who said the insecurity problem had cost the country billions of dollars, said “we believe if we can resolve this issue of insecurity, every other thing will fall in place.”