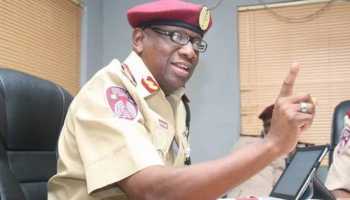 In its 2016 Half Year Corps Performance review, the Federal Road Safety Corps has revealed that Stakeholders consultation has directly and indirectly influenced the accomplishments of the objectives of the Corps on all fronts across the nation.
According to Bisi Kazeem, the Head Media Relations and Strategy of the Corps, the Corps Marshal, Boboye Oyeyemi, stated in his address at a Strategic Session with Sector Commanders at the FRSC Headquarters that the goals of the Corps to meet its mandate of reducing road traffic crashes is embedded in three strategies adopted by the Corps in 2016, to improve fleet regulation and Sustain stakeholders’ consultation, to collaborate with States on improved road safety administration, and to improve enforcement and public education.
While acknowledging the support of the Federal Government for the Corps and road safety in Nigeria, Oyeyemi reiterated that management’s  commitment is imperative for success, as well as monitoring and evaluating processes and procedures to ensure continuous effectiveness in the administration and operational activities of the Corps.
Oyeyemi restated the commitment of the Corps to unwaveringly tackle the use of substandard tyres by motorists in Nigeria, to curb excessive speeding, overloading, number plate violation, timely removal of materials causing obstruction of movement on Nigerian roads, and the commencement of the enforcement of speed limiting device.
In this vein, he expressed the Corps’ readiness to continue collaborating with sister agencies and state traffic agencies like LASTMA, and called on states that are yet to set up their own traffic agencies to do so as the Corps is ready to help in the training of the personnel of such agencies in the FRSC Academy.
The Corps Marshal used the opportunity to encourage the Corps’ field operatives to remain steadfast and deploy measures to demonstrate known and cherished values rooted in dutifulness, firmness and fairness, in the face of challenges ranging from personnel knockdown, assault, kidnap, inducement, and fuelling.