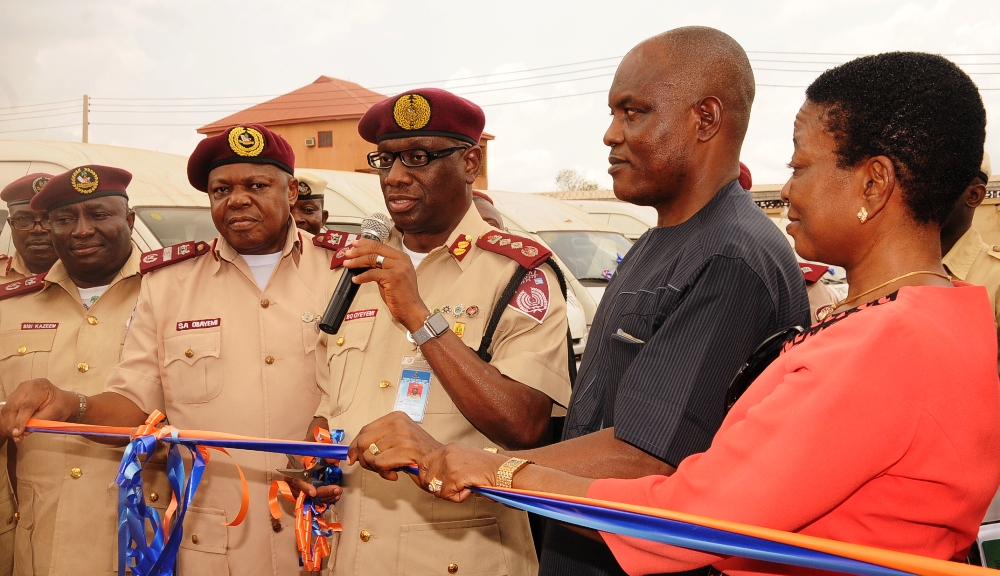 The campaign by the Federal Road Safety Corps for the use of speed limiting device in vehicles operating in the country got a boost as the Corps Marshal of the FRSC, Boboye Oyeyemi, commissioned 300 factory fitted Hummer Buses with the devices into the fleet of the Peace Mass Transport Limited.
Speaking at the event held at the PMT Corporate Headquarters in Enugu, Oyeyemi restated the commitment of the FRSC to pursuit of road safety policies and programmes.
He said the Corps will continue to partner and support transport companies that show commitment to issues of road safety.
According to the Corps Marshal, PMT has continued to demonstrate its commitment to issues of road safety as evidenced by its road safety policies, including regular training and retraining of its drivers, pioneering the use of speed limiters in the country and maintenance culture as well as zero tolerance for overloading.
All these, the Corps Marshal said, make the transport company the preferred choice among the commuters.
He said: “I am here today to demonstrate the support and solidarity of the FRSC to the safety policies of Peace Mass Transport Limited, which align with our safer roads, fuller lives campaigns.
“Seven years ago, when the company started installing speed limiters in its vehicles, no other transport company in the country gave it a chance of success.
“It is however gratifying to note that the experiment has today become a success story, as the company has grown from being tagged: ‘Go slow,’ to becoming the preferred choice of safety conscious travellers.”
Oyeyemi noted that PMT is a living example of the benefits of speed limiters in vehicles, as the company drastically reduced the rate of crashes involving its fleet of vehicles to 50 per cent upon introducing the devices, while the fuel economy that go with the measure remains a source of motivation that would sustain the policy.
He further stressed that as a nation that relies on road transport for almost 90 per cent of its movements, the need for safety measures in Nigeria to make movements of people and goods safe and convenient cannot be over-emphasised.
The Corps Marshal added that the FRSC will remain committed to pursuing programmes that promote safety, noting that the decision by the Company to choose lives over financial gains through its adoption of safety measures is a commendable effort.
He urged other transport companies to emulate the example.
He further advised the Company to consider establishing its own driving school in order to increase the capacity of its drivers for more safety oriented operations.
Oyeyemi further disclosed that the FRSC is presently engaged in promoting public awareness on such safety measures as use of seatbelt by front and rear seat passengers as well as appropriate use of tyres, calling on all stakeholders to join the Corps in the campaigns.
“In our continuing determination to create public awareness on issues of road safety, especially with the increasing rate of tyre-related crashes occurring in the country, we are convening stakeholders’ meeting in Abuja next month.
“We hope to use the platform to enlighten members of the public on proper use of tyres and the fact that tyres, like drugs, do expire; whether or not they are used.”
In his remarks, the Chairman of Peace Mass Transport Limited, Samuel Maduka Onyishi, thanked the Corps Marshal for personally coming down to commission the factory fitted buses with speed limiters, saying the action demonstrates the passion which the FRSC boss has for issues of road safety.
While assuring the people that his company will continue to observe road safety measures in its policies, Onyishi stated that his association with the FRSC has been a long standing one, from which his company has benefitted immensely.
According to him, the willingness of his Management to hearken to the safety advices of the FRSC has not only saved his Company from fatal crashes, but boosted its financial profile with prospects for future growth.
He further disclosed that he chose safety over making quick money when he commenced the process of installing speed limiting devices in his vehicles seven years ago, because he believed the action would be more profiting at the end.
Onyishi noted that though his Company experienced some hurdles when he initially came up with the idea, he is grateful that the foresight has paid off handsomely now as his Company has become the preferred choice among commuters, adding that commuters are motivated to patronise his buses because of the assurances that the drivers drive safely and they would reach their destinations in safety.
Highlight of the event was the facility tour of the Company by the Corps Marshal, during which he was taken round all the segments of the Company’s manufacturing and service areas which support its comprehensive road safety policy.