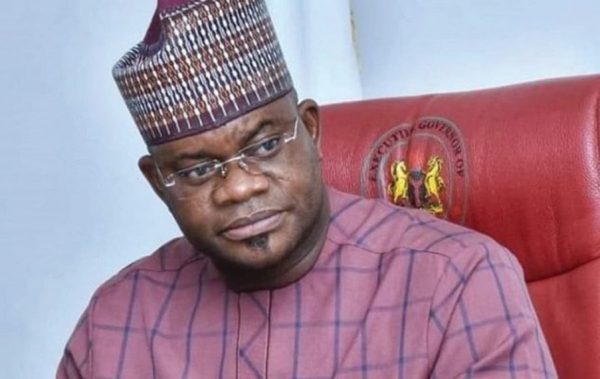 Governor Yahaya Bello of Kogi has said that the spate of kidnappings in the state has reduced to the barest minimum.

He stated this on Saturday at the Senate Press Corps’ Retreat 2020, held in Lokoja, Kogi with the theme, “Democracy and Development in a Federation: Roles of Media, States and Parliaments’’.

Declaring the event open,  Bello, who was represented by his Deputy, David Onoja, said that before the emergence of the present administration in the state in 2016, “Kogi was noted as the kidnap capital of Nigeria’’.

“It’s four years nine months later, though we have not been able to eradicate the kidnappings totally, the numbers have drastically reduced to the barest minimum.

“And highway robberies, bank robberies are becoming things that are in our history books rather than what we experienced.

“We are doing our best in fighting insecurity in Kogi and ensuring that life and property are secured,’’ he said.

On the flood ravaging the state, Bello assured the people of Kogi and Nigerians that “whilst we may not be able to stop the flooding, we will prevent as many lives as possible from going with the menace’’.

“That is our focus, that is our target, that is what we shall achieve by the grace of God.’’

According to him, part of the achievements so far recorded in the state are the bold steps at reforming the civil service and the pension system.

“Today, it is no longer who knows who but on merit and your ability to serve selflessly.

“The leakages and fraud that were endemic in the Kogi State civil service prior to 2016 are becoming a thing of history,’’ he said.

Also speaking, the Commissioner for Information and Communications, Kingsley Fanwo, said that part of the efforts of the state government in the fight against insecurity was the procurement of 200 patrol vans for security agents in the state.

“Proceeds of kidnappings were destroyed; the governor had said he wasn’t going to negotiate with any criminal.

“You don’t negotiate with criminals, you deal with them. That is what the governor did and that should be an example to this nation,’’ Fanwo said.

In his goodwill message, Senator Smart Adeyemi (APC-Kogi), urged the participants that when relating with politicians, they should try to be guided by social and professional responsibility.

“Social and professional responsibility are interwoven; they interlock, but there is still a thin line between the two.

Adeyemi further said that for democracy to thrive in the country, there must be freedom of information.

“There cannot be press freedom when journalists are not paid, when there is no future in the profession.

“We can say there is press freedom when every journalist is proud of his profession because he can pay his bills and can live a decent, average life.’’