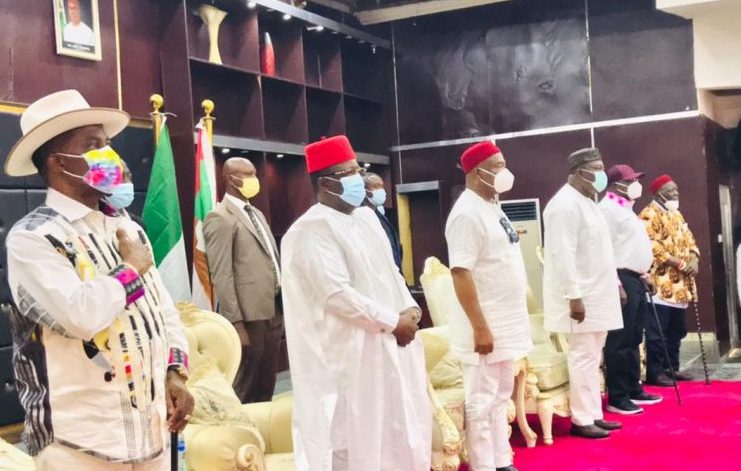 Governors of the South-East states have resolved to maintain a joint security outfit for the code named Ebube Agu (Wonderful Tiger).

The governors made the resolution in a communique during the first South-east security summit held in Owerri on Sunday.

The communique was presented by Chief Dave Umahi, Chairman of the South East Governors’ Conference and Ebonyi governor,

The governors’ conference said the joint security outfit would have its headquarters in Enugu to coordinate the vigilance groups in the zone.

They also resolved to set up a committee comprising security personnel, government officials and other relevant stakeholders to coordinate and monitor the implementation of the joint security platform.

During the meeting, the governors also condemned terrorism and banditry in every part of Nigeria particularly in the South-east where some security formations were destroyed.

The governors expressed support to the federal government efforts in tackling security challenges in the country.

They also resolved to pool their resources as one united zone to fight crime and terrorism in the zone.

They stressed the need to galvanise all relevant stakeholders, bureaucrats and political class to provide support to security agencies in order to achieve their goals.

They also banned open grazing and urged the security agencies to enforce the ban in the states.

They however, called for peaceful coexistence between farmers and herders to enable them to succeed in the fight against criminality.

The meeting was attended by Governors Okezie Ikpeazu of Abia, Willie Obiano of Anambra, Ifeanyi Ugwuanyi of Enugu and Hope Uzodinma of Imo as well as heads of various security agencies in the zone.