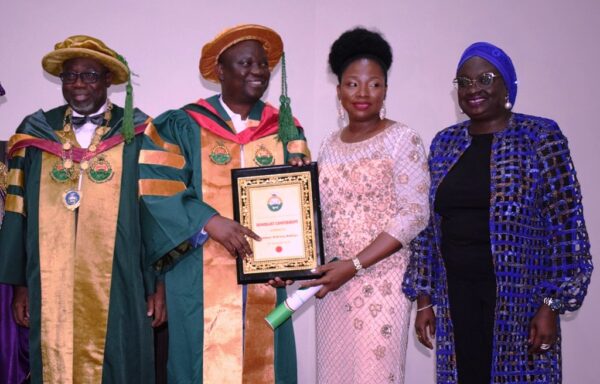 The Nigerian Society of Engineers on Thursday conferred its prestigious Honorary Fellowship on the Managing Director and Chief Executive Officer of LARALEK Group of Companies, Olalekan Adebiyi.
Adebiyi was honoured by the Society at a brief but impressive ceremony held in Ikeja, Lagos and witnessed by top officials of the NSE; Deputy Governor of Ogun State, Noimot Salako Oyedele; family; friends; well-wishers; top government officials of the Lagos State Government; and business associates, among many others.
The President of NSE, Adekunle Mokuolu, said the Honorary Fellowship was conferred on Adebiyi because of his exploits and achievements over the last few years, especially as one of Nigeria’s foremost indigenous construction companies, adding that it was the greatest honour given to outstanding individuals who did not study engineering.
Mokuolu said: “Today is your day; I almost called you an engineer because of your trajectory of achievements in deploring engineering body of knowledge to all that you have achieved in life.
“The Board of fellows and the Council of the great Alumni of the Nigeria Society of Engineers have considered Mr. Olalekan Adebiyi to be worthy in character, in knowledge, in performance of excellence to be conferred with the Honorary Fellowship of the Nigeria Society of Engineers.
“This approval was given at the council meeting of November 14, 2019. This particular honour that is being bestowed on you is indeed for you to do more. Yes indeed, the personal and knowledge and the intellectual resources that are available to Nigerians, you have successfully deplored them for the execution of projects all over Nigeria.”
The NSE Boss also charged the awardee to ensure the strategic implementation of the Nigerian content by ensuring that the template of his success is available to other indigenous engineering contractors and assist them in the challenges they face to ensure all round development of the country.
“To engineers, let us assist one of our own to succeed more so as to be able to provide, through his activities and business dealings, a sure better life and a sustainable infrastructure for our teeming populace in the whole country,” he added.
In her goodwill message, the Deputy Governor of Ogun State congratulated the conferee on the honour done to him by the Society, noting that from his track record, it was apparent that the award was well deserved.
Oyedele said it was gratifying to note that the awardee has a track record as an indigenous company having over 2,000 employees, comprising of 350 engineers, 55 expatriate workers, while the company has constructed over 1,000 roads and built seven bridges in Lagos and other parts of the country.
“With what Mr. Adebiyi is doing in his company, we expect more of you. The reward for good work is more work and the work is to help engineers to be the best they can be. I will also like to encourage you on continuous professional development and all the things that they need to be better engineers and improve the productivity of your business,” she said.
Responding, Adebiyi thanked the NSE for the honour done to him, saying it was a privilege to be recognised for what he described as his modest achievements.
He attributed the success story of his company to the grace of God, while he took time to appreciate individuals who have stood by him through thick and thin since he founded the Laralek Ultimate Group of Companies in 2000, which according to him, has become a global conglomerate which offers diverse services in construction, hospitality, consumer goods, et al.
Dignitaries present at the ceremony included Special Adviser to Sanwo-Olu on Budget, Bayo Shotade; Accountant General of Lagos State, Abiodun Muritala; Executive Secretary, Lands Bureau, Lolade Ajetumobi; former Commissioner for Works and Infrastructure in Lagos, Engr. Ade Akinsanya; and former Commissioner for Transportation in Lagos, Comrade Kayode Opeifa.