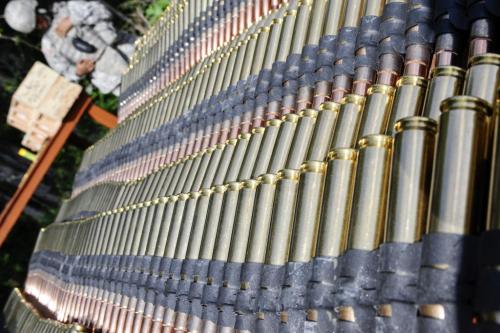 Share
Facebook Twitter LinkedIn Pinterest Email
The Presidential Committee on Small Arms and Light Weapons has said that illicit Small Arms and Light Weapons accounts for over 500,000 deaths annually in the world.
“The International Action Network on Small Arms submitted that Small Arms and Light Weapons account for over 500,000 deaths annually, one life per minute,” Emmanuel Imohe, the Chairman of the committee, said on Monday in Katsina.
Imohe said in a message to commemorate the United Nations Arms Destruction Day, said a 690 million illicit small arms and light weapons are circulating across the world.
He said: “It is estimated that there are over 690 million illicit small arms and light weapons in the world, out of which, over 100 million can be traced to sub-Sahara Africa and over 8 million in West Africa.”
Represented by Ambassador Ghali Umar, the committee’s Vice Chairman, Imohe said the Day was initiated to create awareness of the threat posed by weapons that have killed, injured and terrorized millions of people in the world.
The chairman attributed the arms proliferation to insecurity bedeviling most countries, adding that the committee had recorded remarkable successes which led to destruction of a number of weapons.
He revealed that over 700 assorted arms, ammunition, automatic and semi-automatic weapons were seized and destroyed in Katsina State alone.
In his remarks, the committee’s Programme Coordinator, Nkem Orji, said the committee had recovered over 15,600 arms in Cross Rivers, Rivers, Akwa Ibom, Katsina and Zamfara States.
Also speaking, Governor Aminu Masari, called on world leaders to intensify efforts at ensuring strict adherence to the regulations on Small Arms and Light Weapons.
Masari said, however, that the target would only be achieved through addressing insurgencies, ethnic and religious conflicts.
Over 700 weapons recovered from repentant cattle rustlers and other criminals were destroyed during the occasion.
Presidential Committee on Small Arms and Light Weapons
Share. Facebook Twitter Pinterest LinkedIn Tumblr Email