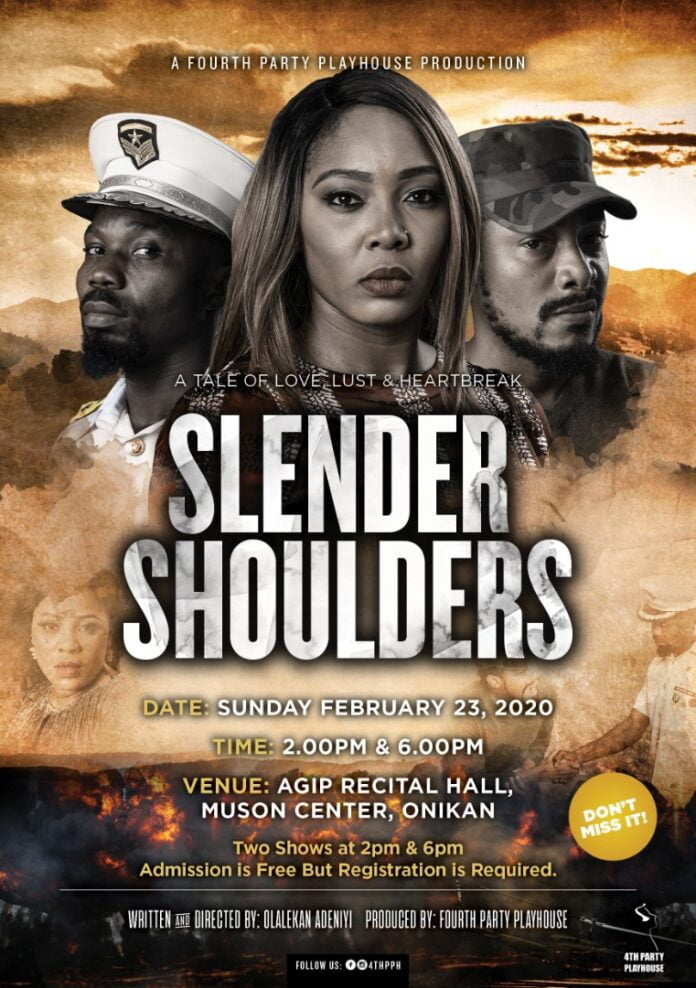 The Fourth Party Playhouse is bringing to the stage another intense, thrilling and eye-opening performance titled Slender Shoulders.
A play set around the early 90s, Slender Shoulders focuses on the life of a young woman who loses her cousin to the bullet of enemy soldiers in her war-torn country, Liberia.
She has no choice but to leave the love of her life and escape to neighbouring Nigeria with her only surviving aunty and younger cousin as refugees.
But as they say, a man’s gift makes a way for him.
Her beauty and sultry voice secure for her a life of fame and wealth.
She becomes a love interest for a powerful member of the Provisional Ruling Council.
But demons and guilt of the past keep hunting her to prove her worth.
How far she would go to prove her love and loyalty to the man who has her heart and her remorse to a family who blames her for a death unforgettable, lies solely on her shoulders.
Is she willing to sacrifice all to prove that they mean the world to her?
The play, which is written, produced and directed by Olalekan Adeniyi, who is the founder and In-house Director of the Playhouse, also seeks to expose some of the ills of the society back then in the 90s, ranging from the abuse of power to insensitivity of military rulers as well as the plague of the dreaded HIV/AIDS virus.
Other plays from the stable of the Fourth Party Playhouse staged over the years include: Pinch of Salt, which was staged last year at Terra Culture; Tale of The Crab, staged in 2018 at the National Theatre; and One-sided Coin in 2017 at Agip Recital hall.
Slender Shoulders will be showing on February 23, 2020 at the Agip Recital Hall, MUSON Centre at 2pm and 6pm.