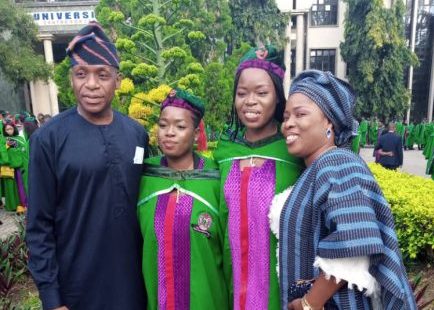 Mariam and Victoria Shorunmu, who relocated from United Kingdom a few years back, studied  Psychology and Sociology at the  institution.

An elated ex-footballer, who doubles as the father of the graduates, congratulated his daughters for the success recorded in their chosen career paths, saying that he and his wife were happy with the graduates for making them proud.

The ex-Super Eagles goalkeeper stated: “We give God all the glory for seeing our children graduate from higher institution.

“It’s a no mean feat that my daughters graduated same day.

“I’m indeed very proud of these girls for writing the name of the family in gold.

“I also want to thank the school authority for impacting positively on them.”

It can be recalled that Shorunmu bagged a chieftaincy title in Wasimi, Ogun State in May this year.

The ex-footballer was conferred with title of Olunla of Wasimi.

His Royal Majesty, the Oniwasimi of Wasimi, Oba Emmanuel Babatunde Oshuntogun, presented the title as a surprise special May 1 gift to the national team hero.

Shorunmu manned the goal for Nigeria at the Ghana 2000 Nations Cup and 2002 FIFA World Cup.

He was brought into the Nigerian national team by Coach Clemens Westerhof in 1992.