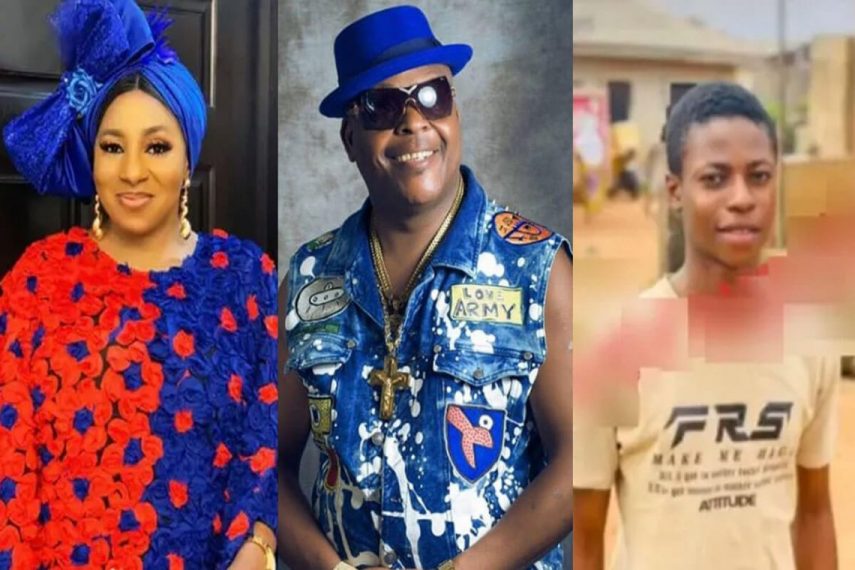 To say veteran musician, Sir Shina Peters, is one of the music legends in Africa shouldn’t be seen as an over-statement.

SSP, as he is fondly called, is loved by all and sundry.

He even gets the nod from millennials, who were barely knowledgeable when his songs were the hits back in the day.

As a testament to his music prowess, the Shinamania singer has notched several national, continental and international awards, and he was recently ordained as a Bishop of the Cherubim and Seraphim Church.

SSP was such a hot cake in his heyday as a successful entertainer who lots of gorgeous and successful women struggled to be with.

At the peak of his reign, he had a son with actress Clarion Chukwura and allegedly fathered the son of late actress, Funmi Martins, the mother of Nollywood actress, Mide Martins.

Meanwhile, the past few days have been filled with drama for the veteran singer and Mide Martins after reports that they abandoned a family member, Damilare Peters, who is now 19 years old.

Damilare is allegedly the love child of Sir Shina Peters and the late Nollywood actress, Funmi Martins, who is a step brother to Mide.

Few days ago, Sir Shina Peters released a video in which he addressed the allegations of abandoning his son.

The singer, however, disclosed that there were some past events responsible for how the whole situation turned out, but he refused to go into details in order to protect Damilare’s future.

He also promised to take care of the boy.

However, in a recent video making the rounds on social media, Damilare made it clear that he is not ready to leave his uncle’s house, where he has been living since the passing of his grandmother.

He said this in response to a call made by his elder sister to have him in her custody.

Damilare said he has no reason to move in with people who have shown no interest in his welfare for the past 19 years.

He reiterated that his sister only just contacted him recently and as such he has no interest in going to stay with her.

According to him, he is fine where he currently resides and has no problem.

He, however, appealed to members of the public to assist him with funds to help further his education.

In an interview with a source close to both Sir Shina Peters and Mide Martins, The Eagle Online learnt that Damilare was born during the period Funmi was said to be in a hot relationship with the Afro Juju singer.

However, those close to the musician insisted that when Damilare was conceived 19 years ago, the musician denied being the father of the child.

“Shina Peters and the late Funmi Martins met at a film location.

“It was after that she said she was pregnant.

“Damilare was born during the period she was said to be in a hot relationship with Afro Juju legend, Sir Shina Peters.

“So expectedly, it was assumed that Damilare was a product of the union between both of them, but some people close to the musician insist that when Damilare was conceived 19 years ago, the musician denied being the father of the child.

“However, SSP has accepted to assist in his upkeep and Mide too said she will take care of him if the family can release him to her.

“It seem the boy is being used to raise funds because SSP has promised a monthly upkeep of N30,000 and he has already sent money for his JAMB (Joint Admissions and Matriculation Board) examination form and tutorial.

“So what does he need money from people for?

It was also learnt that SSP is planning to conduct a DNA test.

This was said to be to put to rest the paternity issue of Damilare.

When contacted, both Sir Shina Peters and Mide Martins said they were not going to speak to the press at this time.

Over the years, it has become a norm for SSP to maintain a low profile during lent, the Christian 40-day period of fasting.

The DNA, it is also believed, will be conducted after the lent season.