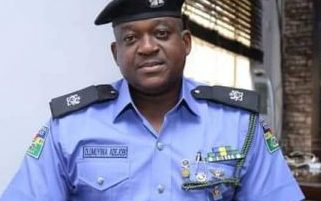 The Lagos State Police Command has said the man caught in a viral video harassing a lady inside a commercial vehicle claiming to be a police officer is not a policeman.

The command’s spokesperson, Muyiwa Adejobi, in a statement on Wednesday debunked the man’s claim, disclosing that the man had been identified as one Matthew, a  driver employed by GTC Laundry Services, along Channels TV Road, Isheri, Lagos State.

“The man, simply identified as Mr Matthew, who assaulted the lady, one Olajumoke Okeyemi, for correcting his actions and act of sexual harassment in a public vehicle, is a driver employed by GTC Laundry Services, along Channels TV Road, Isheri, not a police personnel as he claimed during the ‘drama’ in the video.

“Mr Matthew was in a commercial bus moving from OPIC Estate Isheri to Mowe with the lady when the suspect resorted to verbal abuse and attempted to physically assault the lady for recoding his criminal and indecent act on her phone. But for reasons best known to the suspect, Mr Matthew, impersonated to be a police officer.”

The spokesperson said the state command, in collaboration with the Lagos State Domestic and Sexual Violence Response Team, Alausa, Ikeja, had commenced investigation into the matter and intensified efforts to arrest the suspect.

Adejobi further disclosed that the suspect has also been identified by some other women who had similar experiences with him in previous years along the same route, adding: “The concerned women have made series of comments on the social media which will assist the police in their investigation.

“The Commissioner of Police, Lagos State, CP Hakeem Odumosu has however condemned such inhuman, immoral and criminal act of Mr Matthew who, with his careless and unguided utterances, dragged the name of the Nigeria Police Force in the mud. He warned that such an act constituents an offence under the law and will not be tolerated.”

Adejobi said Odumosu had ordered the Gender Unit of the Command to expedite action on the case, arrest the suspect and commence proper investigation so as to maintain sanity in society and discourage others from engaging in such heinous act.