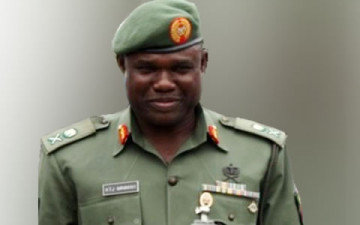 The Chief of Army Staff, Lieutenant General Kenneth Minimah, has embarked on an operational visit to units within 7 Division Area of Responsibility of the Nigerian army.
This was contained in a statement signed by Brigadier General Lajide Laleye, the Director, Army Public Relations.
The statement said that the COAS was accompanied by the Chief of Air Staff, Air Marshal Adekunle Amosu.
They specifically visited troops deployed on Operation ZAMAN LAFIA in Borno, Yobe and Adamawa States in the ongoing military operations against insurgents in the North East part of the country.
Addressing the troops during the visit in their different locations, the COAS advised the soldiers to make discipline their watch word at all times.
Minimah also urged them to remain resolute in the face of security challenges facing the country.
Minimah reminded the troops of their responsibility as soldiers, noting that as professional soldiers, they must rise to defend their fatherland.
He noted that the present security challenge facing the nation was not insurmountable if the troops were well led and remain vigilant while carrying out assigned duties.
Minimah commended the troops for their hard work and dedication to duty and promised that their welfare would remain his top priority.
The COAS also urged them to imbibe good maintenance culture to ensure that their equipment continue to serve them effectively.
He further advised troops to be steadfast in observing the rules of engagement in the conduct of ongoing operation.
He said: “I am aware that your task is not an easy one, considering that you must defeat faceless and vicious enemies.
“At the same time, you must protect the rights of innocent citizens in the operational area.”
The COAS’s visit to frontline troops in Borno, Yobe and Adamawa began on February 18.