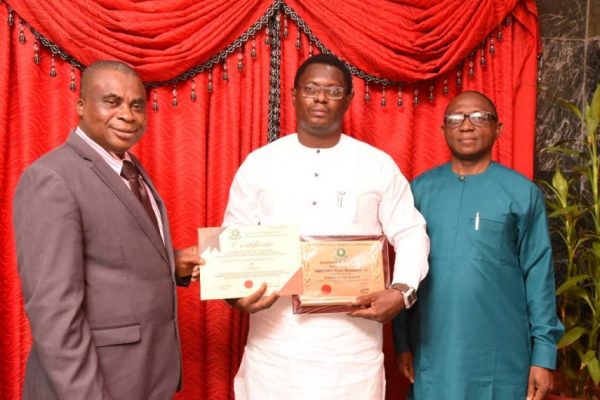 Director-General of the Centre for Public Service Productivity and Development, Dr. Chris Egbu (left), Special Assistant (Press) to President of the Senate, Ezrel Tabiowo (middle), and Council Member of CeProd, Oloyede Adeniyi (right) at the induction of the Senate president’s aide and six others as Fellows of the Centre in Abuja
Share
Facebook Twitter LinkedIn Pinterest Email

The board and governing council of the Centre for Public Service Productivity and Development (CeProd) has elected and inducted the Special Assistant (Press) to the Senate President, Ezrel Tabiowo, and six others as fellows.

The nominees who were drawn from various professional backgrounds were inducted after undergoing an intensive training course organized by the Centre in Abuja.

Those also elected and inducted by the board of CeProd include a former director of the National Population Commission, Bala Inuwa, who is presently the managing director of the Kano Agricultural Supply Company Limited.

President of CeProd, Professor Sandeep Gupta, said the election of the nominees as fellows was “in recognition of your professional standing and demonstrated commitment to creating, maintaining, extending and promoting the highest world standards in productivity and economic growth.”

While contributing to a roundtable discussion on productivity and what works in Nigeria, the director-general of CeProd, Dr. Chris Egbu, attributed the lingering insecurity in the country to very low levels of productivity, which he described as “disturbing”.

Mr. Oloyede Adeola Adeniyi, a council member of CeProd, charged the inducted fellows to constantly deploy productivity strategies in public service to ensure effective management of human and capital resources at their disposal for the realization of institutional or organizational goals and objectives.