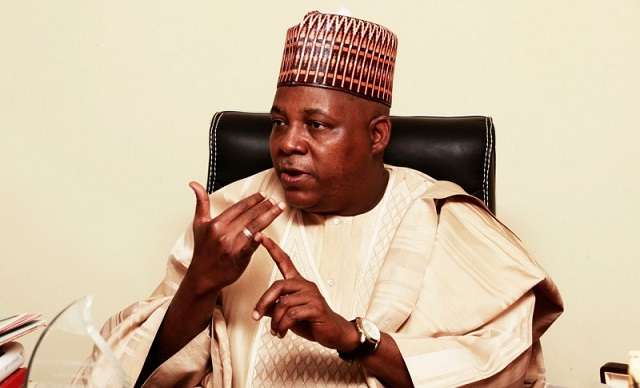 Governor Kashim Shettima of Borno State said although Senator Ali Ndume is his kinsman, he would not defy the All Progressives Congress’s choice of Senator Ahmad Lawan for the position of Senate President.
Shettima made this known at his Abuja residence, shortly after the “Ahmad Lawan for Senate President Group” paid him a courtesy visit.
He said as a loyal party man, he had chosen to abide by the party’s decision.
Shettima said most APC members, particularly from the North, won their elections based on their alliance with President Muhammadu Buhari and should not work against the President’s choice.
He said: “I am the first citizen of the state and I have consulted widely with our leaders from Borno before resolving to back Senator Ahmad Lawan.
“Most importantly, let us be honest, Muhammadu Buhari is the single candidate in the country that most of us from the North won our election by aligning with him.
“I have very little to say.
“Ordinarily, I am not even supposed to come here because there are three things to be combated.
“I hail from the same state with the Distinguished Senator Ali Ndume and I appreciate the fact that politics is local.
“But politics is also national.
“I believe the blood that binds us together supersedes whatever we might harbour.
“But I fully align with the aspiration of my party and by the grace of God we are going to mobilise all our goodwill to see that we are fully on board.”
The governor, who is also a senator-elect in the 9th Senate, stressed the need for APC members to maintain discipline by respecting the party’s decisions.
He said such was necessary because there was no provision for independent candidates in the law books.
Shettima said: “We are for Senator Ahmad Lawan.
“We are for Femi Gbajabiamila and all other senators and other House of Representatives members endorsed by the party.
“We are for the party that allowed everyone to aspire to political offices.
“We believe that we must respect the party.
“There is no provision for independent candidates.
“I don’t know whether anyone has won under an independent platform, except maybe Senator-elect Ifeanyi Ubah, who brought in an anonymous party and won.
“So, I feel honoured by the visit, but honestly this visit is unwarranted.
“I am fully onboard.
“I am for Senator Ahmad Lawan for Senate President.
“President Buhari has endorsed some of the best hands we have in the system, and where we hail from, Senator Ahmad Lawan is one of the best hands we have.
“It is a reality.
“He has been in the National Assembly since 1999.
“He has the experience, exposure, pedigree and intellect to redefine the process.
“He is the best amongst equals.
“He is level headed, calm, mature and we need such quality of leadership to drive the 9th Senate.”
The senator-elect assured the party that he and other elected citizens of Borno State would prevail on Ndume to drop his ambition.
Shettima said: “We, the elected representatives of the people of Borno, are not at war with Senator Ali Ndume.
“He is my kinsman, but we will continue to prevail on him to align himself with the aspirations of the party.
“We are not at war.
“We belong to the same paternity.”