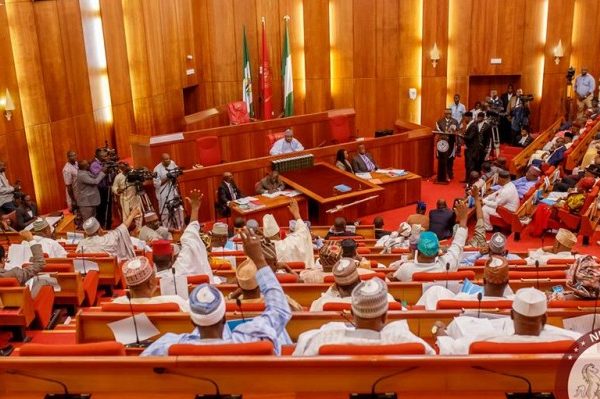 The Senate on Thursday passed the Agency for National Ethics and Values Bill 2018.
This followed the presentation of the report of Committee on Information and National Orientation at plenary.
Presenting the report, Chairman of the committee, Senator Suleiman Adokwe, said the bill sought to provide legal framework for practices in government and private places to observe certain ethical standards.
Adokwe said: “With this bill, the breach of ethical standards will incur certain punitive measures, which is a significant departure from the mandate of the National Orientation Agency based mainly on persuasion.
“Now, we have provided for some punishment, from fine to outright imprisonment.
“This is a major step in fighting corruption in this country.
“If you know that certain practices will earn you fine or imprisonment as the case may be, you are more likely to be circumspect.”
On fears that President Muhammadu Buhari may not assent to the bill, Adokwe said that he was optimistic that the President would do justice to it.
He said: “We believe he should assent to it because there is a committee in the Presidency that deals with matters of ethics and values.
“It used to be headed by Sarah Jibril. She tried to ensure that a legal framework was provided, but it didn’t work.
“The National Orientation Agency is set up to persuade people to behave in a certain manner and to do what is right.
“With this bill however, if you are persuaded and you still persist, somebody should be able to make you comply with standards and values of the country.’’
According to him, some of the ethical issues border on, for instance, sexual harassment enforcement, especially in office environment.
The lawmaker said that people often got away with harassment and it was easily passed away as normal ways of doing things as Africans.
He said: “The world is changing and we need to know that there are certain things that are not acceptable and if we continue with them we should be punished.”
The lawmaker stressed that it was high time Nigerians knew that they would not get away with certain unethical behaviours.
In his reaction, the President of the Senate, Dr Bukola Saraki, put the bill to a voice vote and it was unanimously passed by the lawmakers.