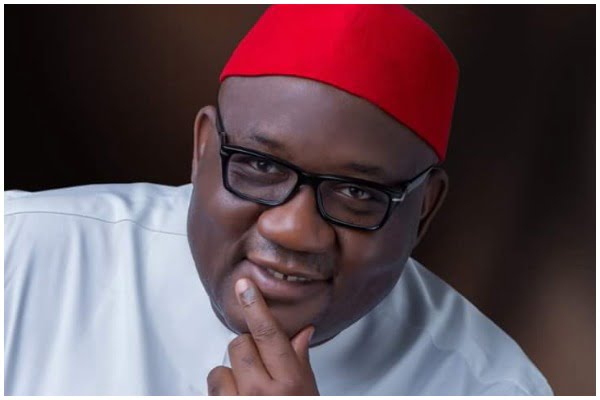 The Senate on Wednesday held a valedictory session to honour late Senator Benjamin Uwajumogu, who until his death represented Imo North Senatorial District in the National Assembly on the platform of the All Progressives Congress.
The Session, which started at 11am and ended 2:35pm, had Senators eulogising and reliving individual experiences and last moments with the deceased lawmaker who died on December 18, 2019.
The Senate Leader, Yahaya Abdullahi (APC-Kebbi North), who opened the floor for valedictory speeches, described the lawmaker as an icon who had an active and impactful political life.
Abdullahi said: “Late Senator Benjamin Chukwumeka Uwajumogu was a distinguished colleague who excelled in very facet of his senatorial duties, whether to his constituency or in his committees duties as well as his usually articulate contributions to Senate debates.
“As an industrialist, he could be best described as a colossus.
“He was a think-tank for several birds of both private and public sectors.
“Amongst them, is the Nigeria Shippers Council.
“In politics, late Senator Benjamin Chukwuemeka Uwajumogu could also be described as a political icon.
“He has a rare stewardship with exemplary leadership qualities.
“He lived an active and eventful political life.”
The lawmaker added that Uwajumogu, who was the only Senator elected on the platform of All Progressives Congress from the South East in the eighth Senate, served as Vice Chairman, Senate Committee on Ecology and Climate Change and member of other Senate Committees on Agriculture, Marine, Housing, Banking, Army, Custom and Petroleum.
A total of 34 Senators paid glowing tributes at the valedictory session held by the Senate in honour of the deceased.
Among the lawmakers were: Deputy Senate President, Ovie Omo-Agege; Senate Minority Leader, Enyinnaya Abaribe; Deputy Senate Leader, Ajayi Boroffice; Deputy Chief Whip, Aliyu Sabi Abdullahi; Minority Whip, Philip Aduda; Senator Rochas Okorocha (APC – Imo West); Ezenwa Francis (PDP – Imo East); Ike Ekweremadu (PDP – Enugu West); Oluremi Tinubu (APC – Lagos Central); Opeyemi Bamidele (APC – Ekiti Central); Olamilekan Adeola (APC – Lagos West); Yusuf A. Yusuf (APC – Taraba Central); Biodun Olujimi (PDP – Ekiti South); Michael Nnaji (PDP – Ebonyi South); Gershom Bassey (PDP – Cross River South); and Abba Moro (PDP – Benue South).
Others were: Isaku Abbo Elisha (PDP – Adamawa North); Fadshunsi Adenigba (PDP – Osun East); Abdulfatai Buhari (APC – Oyo North); Barau Jibrin (APC – Kano North); Bala Ibn Na’Allah (APC – Kebbi South); Francis Alimikhena (APC – Edo North); James Manager (PDP – Delta South); Albert Bassey Akpan (PDP – Akwa-ibom North East); Ali Ndume (APC – Borno South); Sani Musa (APC – Niger East); Danjuma Goje (APC – Gombe Central); Clifford Ordia (PDP – Edo Central); Matthew Urhoghide (PDP – Edo South); Samuel Egwu (PDP – Ebonyi North); Obinna Ogba (PDP – Ebonyi Central); Sarajudeen Ajibola (APC – Osun Central); and Isa Jibrin (APC – Kogi East).
In his closing remarks, President of the Senate, Ahmad Lawan, said: “Senator Uwajumogu gave a very good account of himself as a human being. Calm, cool, calculated and purposeful.
“He joined us a little bit late in the eighth senate, and being the only Senator of APC extraction from the South East, he was close to everyone especially in the APC caucus and the entire Senate.
“Every time there was a seeming crisis, he would preach ‘let us unite, let us work for Nigerians who have sent us here’. That was in the eighth senate.
“In the ninth senate, he was delayed in joining us, so he took his oath of office after the inauguration. He remained the same person up till the last day of the debate in which he participated here.
“When he stood up here to contribute, in his intervention on the maltreatment of traders of Nigerian extraction in Ghana, he emphasized the need for us (members of the National Assembly), the government and people of Nigeria, to stand for our citizens wherever they are.
“After the close of plenary, he followed me to the office and he said, Senate President, you need to take this matter up with the executive arm of government, so that they act fast. I assured him we would do our best as leaders of the senate, to meet the executive arm of government to expedite action.
“Nigerians have been suffering in many parts of the world, especially in Africa. That was coming after the South African Xenophobic attack on Nigerians, and we all felt very strongly that our citizens must be defended wherever they are, especially those who are doing legitimate businesses, and those who are not should be prosecuted through the legal processes in those countries rather than killing and beating them up.
“So, he lived and died for his people. As a politician, he had a very good trajectory, having served as State Assembly member and Speaker of that legislative arm of government in Imo State, and of course here in the Senate, he was a friend to everyone.
“Normally, you’ll find a committee Chairman in a lot of controversies and tendencies, but I think Senator Ben Uwajumogu was not someone who was controversial. He was always straight to the point, no controversy but deep in his submission.
“He has gone, but he has left humanity for us and to continue to remember him, frankly, is to continue to do those things that he believed in, lived for, and died for.
“For us in the Senate, and indeed this ninth Assembly, there’s nothing more important to us than working for Nigerians. That is what our late colleague believed in, and worked for.”