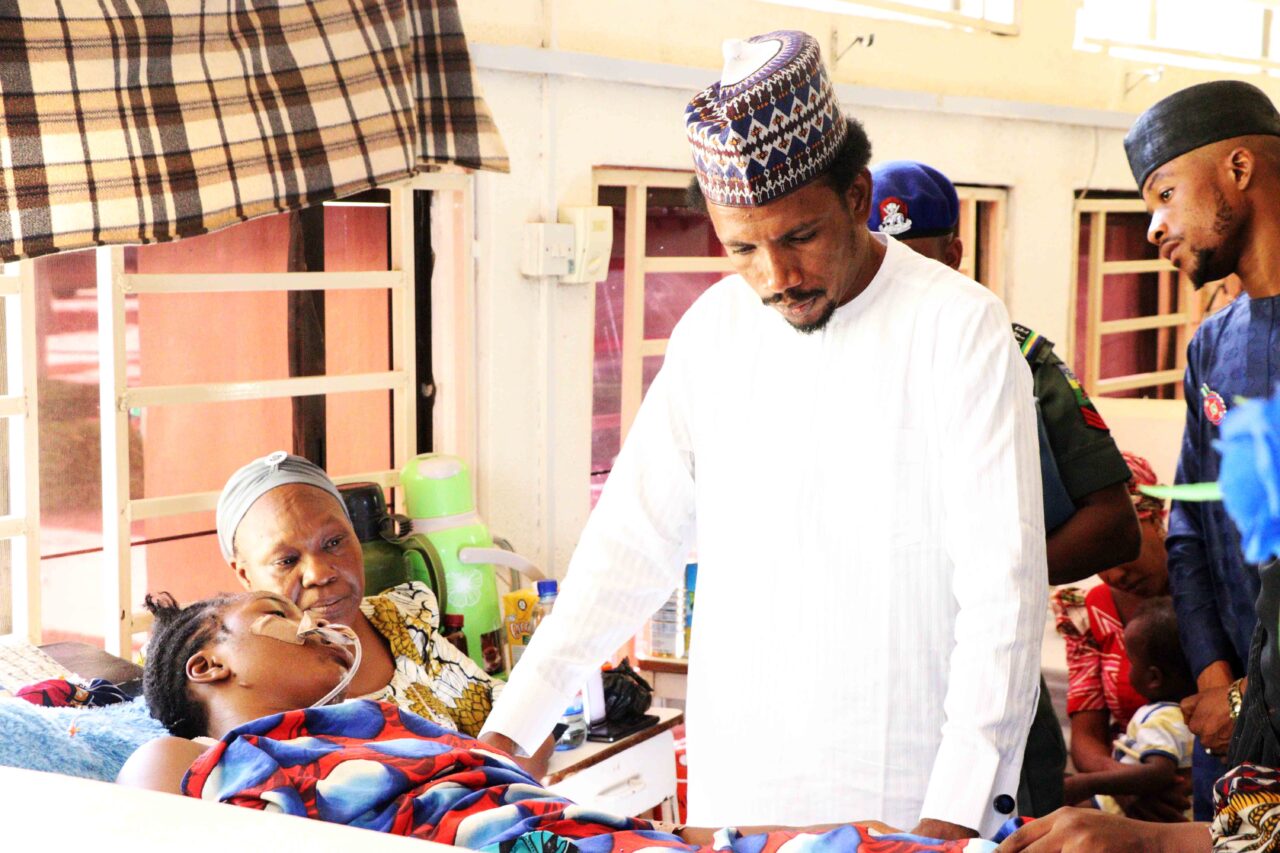 Senator Ishaku Abbo, popularly known as Cliff, has pledged a donation of N1 million to indigent patients at the Federal Medical Centre, Yola, Adamawa State.
The representative of Adamawa Northern Senatorial District, made the pledge on Friday.
Abbo revealed that he initially visited the health facility to commiserate with his political campaign fan, Sandra Peter Teru, who was involved in a motor accident on her way to school.
The visit has however turned out to be a surprise to many as the senator went round the entire wards of the centre, distributing money, encouraging patients to be strong, with the prayer that they “shall be healed in God’s name.”
Some of the patients who were on admission receiving free treatment, courtesy of the Hospital Paupers Fund, established by the management of FMC Yola for the benefit of indigent patients, shared the same senatorial district with Abbo.
Abbo was highly impressed with the Pauper’s Fund initiative and was satisfied with the way and manner the fund was managed, which prompted him to key into the fund scheme as a social responsibility
He said: “Hospital Paupers Fund is a welcome development.
“It is a scheme that international donor agencies and organizations should key in and that which other hospitals across the country should establish as a corporate social responsibility.
“In the interim, I’m making a donation of N1 million to the fund.”
Having been impressed with the cleanliness of the hospital, the effective and efficient healthcare service delivery, Abbo has appointed himself a bona fide Ambassador of FMC Yola.
He said: “My child was admitted here in 2009.
“I was also hospitalised in 2010.
“FMC Yola, to say the least, has improved tremendously both in terms of manpower and types of equipment.
“Look at the ongoing projects.
“That’s why we supported the move for the upgrading of the health facility to a teaching hospital and we shall ensure that the funds allocated for the actualisation of it are captured in the supplementary budget.
“As an Ambassador of FMC Yola, I’ll mount a donation campaign, using YouTube, with a view to generating more funds for the Hospital Paupers Fund so that more indigent patients can have free treatment, among other tasks targeted at adding value to the health facility.”
Abbo noted that it is one thing to be a politician, it is, however, another to be a man of conscience when it comes to service to humanity as in healthcare.
He said: “Sentiments, religious, tribal and/or party politics, should be kept aside and work collectively as a team for the sake of humanity.
“It is only inhuman for one to recklessly and mischievously challenge an organisation or personality that is working assiduously for the greatest good of the community, social welfare of the poor people and patient care, as a corporate social responsibility, such as what is obtained in FMC Yola and that which is worthy of emulation.
“My brother, the Medical Director, Prof. Auwal Muhammad Abubakar, has done and is doing amazing things, making Adamawa State proud.
“He must, therefore, be supported by whatever means necessary.
“I will continue to agitate for more funds to be allocated to the health sector in the budget.”
Abubakar commended the three senators from Adamawa State for their cooperation and contribution in having the health facility upgraded and a medical college established.
He thanked Abbo for the visit and the N1 million donation to the Hospital Paupers Fund.
He disclosed that the health facility enjoyed philanthropic interventions by the sons and daughters of Adamawa State within and outside the country.
The recent ones are the building and equipping of the Burn Unit, which the former Secretary to the Government of the Federation, Babachir David Lawal, facilitated; a maternity complex built by Nigeria’s First Lady, Aisha Muhammadu Buhari; a state-of-the-art X-ray machine donated by the SGF, Boss Mustapha; and patient-relatives waiting areas built by Alhaji Mohammed Aminu Umar Mayo-Belwa and other philanthropists.
Abubakar further said the health facility has benefitted from the intervention of the North East Development Commission and Petroleum Equalisation Fund, in addition to the interventions by other corporate organisations and donor agencies
He revealed that referral cases from FMC Yola have reduced drastically because consultants from all over the country have been visiting the health facility.
This has translated to cutting down the cost of having to travel for treatment where a patient would have been referred to.
The health facility, according to Abubakar, has since started postgraduate training in many departments.
The challenge, however, has been healthcare funding, adding that the overhead was not even enough to pay for power supply, hence the internally generated revenue would have to be used.
He said in spite of expanding the health facility to 330 beds capacity, the occupancy has almost always been 100 per cent.
He said: “We have patients coming from southern Borno, Southern Gombe, northern Taraba and even neighbouring countries like Cameroon to access healthcare services in FMC Yola.
“Unlike in Ghana and other counties where foreigners are charged hospital bills more than the citizens, in FMC Yola, our fees for service are moderate and uniform for all patients irrespective of citizenship.”
The primary and secondary healthcare facilities in the state are having a challenge with effectiveness and efficiency in patient-care services.
FMC Yola, though a referral hospital, would have to accommodate patients presented with ordinary malaria and even catarrh, thereby shouldering the constraints associated with the primary and secondary healthcare.
The patients on admission and their relatives the Periscope reporter interviewed expressed their appreciation, showering prayers on Abbo for taking part of the day to be with them in the hospital and for the donation.