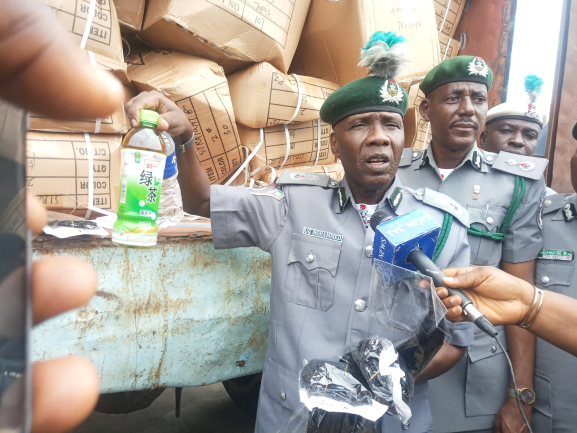 The Nigeria Customs Service, Seme Border Area Command, has intercepted some contraband items worth over N10 million in the last two weeks.
The items included women hair, table waters, expired ginger drinks and foreign parboiled rice.
The Customs Area Controller of the Command, Comptroller Mohammed Garba, made this known at a press briefing on Monday in Seme.
He said that the banned substance was smuggled into Nigeria with durable goods through the border.
According to him, the command intercepted table waters and ginger drinks with inscriptions in Chinese.
He said that the smugglers also used hair attachment to conceal the contraband water, noting that any durable goods used to concealed prohibited good would be forfeited with the contraband.
Garba said that National Drug Law Enforcement Agencies was in a better position to explain if the intercepted table water was actually drinkable or not.
He said: “The Seme command intercepted 7,524 foreign table water valued at N1.7 million, 83 cartons of Amira/Makoko soap, with DPV 1.8 million, 1,718 bags of 50kg foreign parboiled rice, 26 bales of used clothes of N918,000, 14 cartons of Nitro faminne soap worth N169,000.
“The intercepted items also included 13 bags of expired rice worth N54,000, eight sacks of used shoes worth 98,000, 65 pieces of six yards textile worth N63,000, 11 cartons of insecticide worth 13,000.
“Also among the seizures are 864 of 30 litters cans of sulphuric acid worth N3.5 million, two sacks of rubber slippers worth N38,000 and two cartons OT lemon cream worth N77,000.”
He said that the command also intercepted 16 bags of rice at Gbaji axis on Monday worth N8,000.
He however said that the command generated a sum of N4 billion in the first half of 2019 while noting that the command had been surpassing its monthly revenue target for the last three months.
He explained that the amount generated represented about 64 per cent of the annual allowed.
The command boss highlighted the benefit the country would gain from the inter-connectivity between Nigerian and the Republic of Benin.
The inter-connectivity inaugurated on June 20, was done by the Comproller-General of Customs, Retired Col. Hameed Ali.
He, however, called on the Benin counterparts to respect the International law guiding the transfer of cargo from one customs administration to another.
Garba added that over the years, transit provisions have been codified by a number of international Conventions.
He said: “This are the World Customs Organisation Kyoto Convention and the 1982 Geneva Convention of the harmonisation of frontier control of goods.”
He said that the Article V of the General Agreement on Tariff and Trade provides the freedom of transit.
He said it also determines that “there shall be freedom of transit through the territory of each contracting party, via the routes most convenient for international transit for traffic in transit”.
He affirmed the command continuous seizures until the right signal was achieved to discourage other people from indulging in the smuggling.
He said that a total of 37 vehicles had been released to successful bidders of the auctions vehicles domiciled at the command.
Garba, however, urged the general public to be vigilant against internet fraudsters who prey on unsuspecting members of public with the intention to dupe them with tricks of auction of seized goods.
Graba urges freight forwarder to desist from acts that was against the law while urging members of the public to stop consuming smuggled goods as it was dangerous to their health.
In his response, the Seme Coordinator of NAFDAC official, Dr Nurudeen Audu, said import and export of water remained banned.
Audi said that the agency would take the liquid to the laboratory in Oshodi to ascertain the efficacy of the content in the bottle.
He said that sulphuric acid was restricted by NAFDAC, adding that before one could import and clear the sulphuric acid, NAFDAC would issue permit as well as end users certificate.
Audu said that the owner of the certificate of the import had expired since 2015 but still believed that he could still smuggle the products into the country.
He noted that luck ran against him as the customs intercepted him through joint examination.