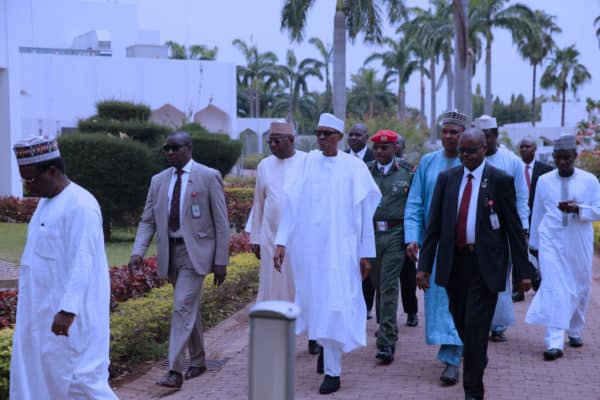 President Muhammadu Buhari on Friday in Abuja stepped out to join hundreds of Muslim faithful to perform the Juma’at prayer at the Aso Rock Mosque.
This is coming two days after the President failed to attend the weekly Federal Executive Council meeting.
Buhari’s failure to attend the FEC meeting this week made it the third time in a row.
He had since his return from a medical vacation in the United Kingdom not been seen in public often except at the Friday prayers.
The News Agency of Nigeria on Friday reports that the President, who was in white traditional attire with a cap to match, came into the mosque at about 1.23pm.
The President, when he came out of the mosque after the prayer, asked for the whereabout of his Personnel Assistant on Photography, Bayo Omoboriowo.
President Buhari had initially planned to receive President Mahamadou Issoufou of Niger Republic on Friday before the visit was rescheduled at the instance of the would-be visitor, who said he has another domestic engagement.
Presidential spokesman Femi Adesina in a statement on Thursday night said all arrangements had been concluded for President Buhari to receive his Nigerien counterpart and his delegation at the forecourt of the Presidential Villa.
He said the President was to attend the Juma’at prayers together as well as lunch before the last-minute postponement.
“A new date for the visit will be announced in due course,” Adesina said.
Those who joined the President at the mosque included some cabinet ministers and members of the National Assembly, Chief of Staff to the President Abba Kyari and the Group Managing Director of the Nigerian National Petroleum Corporation, Maikanti Baru.
Others at the mosque were the National Security Adviser, Babagana Mongunu; the Director-General of the Department of State Service, Lawal Daura; and other muslim faithful.