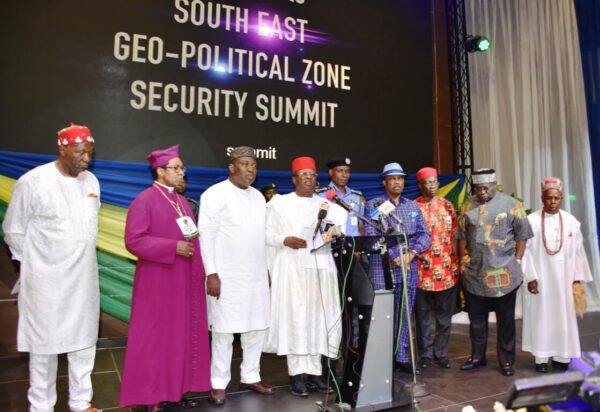 The Inspector General of Police, Mohammed Adamu, on Wednesday met with governors of the South East zone at the Government House, Enugu.
In attendance in the meeting, which started at about 10am were Governors of Abia, Okezie Ikpeazu; Ebonyi, Dave Umahi; Anambra, Willie Obiano; and the host, Ifeanyi Ugwuanyi of Enugu States.
The Imo State Governor, Hope Uzodinma, was represented by his deputy, Prof. Placid Njoku.
Also in attendance was the Commissioner of Police in Enugu, Abdulrahaman Ahmad.
The News Agency of Nigeria reports that the IGP was in the state for the South East Security Summit holding in Enugu.
NAN further reports that the closed door meeting was still going on as at 1:15pm, while invited guests, including royal fathers, members of the clergy, Ohaneze Ndigbo and security agencies, were left at the venue of the event.
However, some of the dignitaries at the event, including traditional rulers and the President General of Ohaneze Ndigbo, Chief John Nwodo, staged a walk out in protest of keeping them waiting without any information.
Prior to the walkout, the Archbishop of Enugu Ecclesiastical Province and Bishop of Enugu Diocese of Anglican Communion, Bishop Emmanuel Chukwuma, had addressed the audience.
Chukwuma, in his speech, said it was unfair for the governors of the zone to treat them with contempt, adding that such would not happen elsewhere.