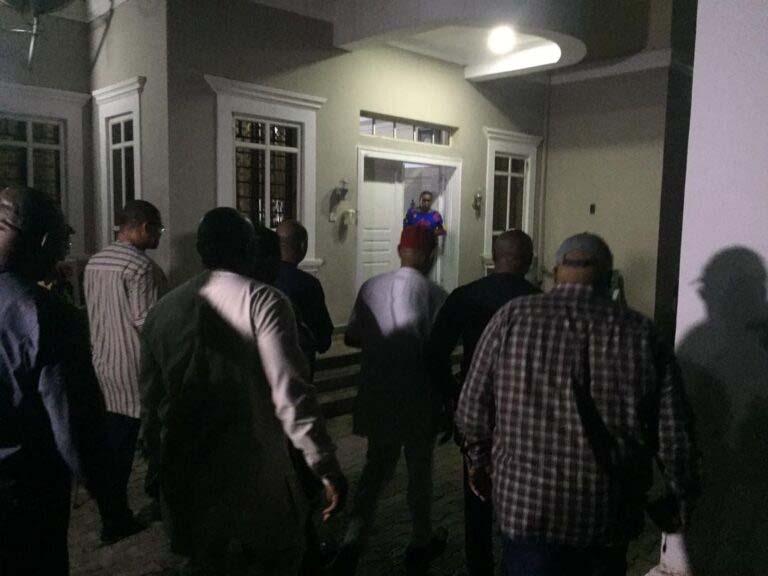 A report by Saturday PUNCH has unearthed those behind the invasion of the home of Justice Mary Odili of the Supreme Court.

Odili is the wife of a former Governor of Rivers State, Peter Odili, who is in court with the Nigeria Immigration Service.

Dr. Odili took the NIS to court over the seizure of his international passport.

While the Economic and Financial Crimes Commission in a statement on Friday by its spokesman, Wilson Uwujaren, denied that its operatives were behind the invasion of the home of the Odilis, the Nigerian Police Force kept mute.

But a report by Saturday PUNCH revealed that operatives of the EFCC and Police backed by officials of the Federal Ministry of Justice were behind the invasion.

They operated under the Joint Panel Recovery unit of the Federal Ministry of Justice.

According to the report, a Chief Magistrates’ Court approved the search warrant based on which the operatives went to the home owned by Justice Odili.

The search warrant was said to have been approved after a whistleblower, Aliyu Umar, claimed to have observed illegal activities going on at 9, Imo Street, Maitama, Abuja.

Umar’s affidavit, dated October 13, 2021, read in part: “I have observed some illegal activities going on in those houses within Abuja are illegal and hereby report the said matter to the law enforcement agency.

“I hereby state that all information provided by me to the EFCC is true and correct to the best of my knowledge.”

In a second affidavit deposed to by a senior police officer, Chief Superintendent of Police Lawrence Ajodo, the panel applied to the Chief Magistrate in Abuja seeking a search warrant to search the house.

Justice Odili was said to have initially resisted the attempts by the policemen to search her house, insisting it belonged to her and not her husband.

However, after the media outcry, the Chief Magistrate was reported to have rescinded his order.

Iyanna accused the operatives of misleading the court and revoked the search warrant.

The new order read: “Upon misrepresentation to this honourable court that led to the issuance of a search warrant in favour of Joint Panel Recovery, Ministry of Justice, against House 9, Imo Street, Maitama, Abuja, dated October 29, 2021. In view of the above fact, the said search warrant is hereby revoked.”