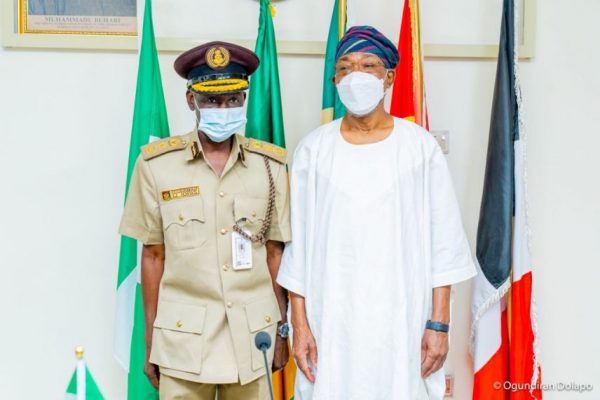 Minister of Interior, Ogbeni Rauf Aregbesola, has charged the acting Comptroller General of Immigration, Idris Isah Jere, to effectively secure the Nigerian borders and ensure no person slipped in from outside with the intention to harm the country.

The Minister gave the charge when Federal Commissioners and Board Secretary of the Civil Defence, Corrections, Fire, Immigration Service Board (CDCFIB), visited his office to present the Acting CGI to the Minister.

In his speech titled, Power is Responsibility, Aregbesola noted that the primary responsibility of the CG is to “lead the NIS to provide security at the Nigerian borders.”

He then enjoined the CG that under his superintendence, “no person should come in from outside with the intention to harm our country in any way.

“It is important also that you ease the passage of persons that will add value to our country. You will maintain the delicate balance of stopping the bad guys and attracting the good guys.”

On passport issuance administration, the Minister noted that Nigerians who are desirous of getting Passports must get it expeditiously and without losing their dignity in the process of doing so.

He said, “You are pretty much aware of the reforms being carried out; foremost of which is in passport administration. Being a passport officer, you will appreciate this challenge more than most. I have no doubt that you will be able to drive this reform and accelerate its success.

Aregbesola further stated that the Acting Immigration boss must build on the achievement of his predecessor in office, noting that his appointment as the Acting CG is natural and easy, being the most senior officer on the roll.

“He has put in 34 years of service and has been at the Nigeria Immigration Service (NIS) all his working life. He is therefore an embodiment of the institution.

“It is important therefore that you prepare your mind for service. Your predecessor made his mark and left giant footprints. You will be assessed against this,” the Minister noted.

On appointment of a substantive Comptroller General for the Service, the Minister stated that the transition will follow the due process.

“I am glad therefore that the process of selecting a successor has kicked in and I am confident that in a short while, we shall have a substantive Comptroller General,” Aregbesola stated.

The Minister also rallied the NIS to support the Acting CGI and assured him of the cooperation and assistance of the ministry and the Federal Government.

“I enjoin the officers and men of the NIS to cooperate with and assist you in all ramifications and I can assure you of the unalloyed support of the ministry and government on your assignment,” The Minister stated.

In his response, Acting CGI Idris Isah Jere, affirmed his commitment, with the collaboration of Officers and Men of the Nigeria Immigration Service, to delivering on the mandate handed to him.

“Sir, the Service is committed to our primary mandate, which is securing Nigeria’s border and also concluding on the passport reforms initiated by my predecessor in office. I will also ensure Staff Welfare is well taken care of as no reform can be successful outside a well dedicated and motivate workforce.”

Acting CGI Idris Isah Jere joined the service in 1987, steadily rising through the ranks to be appointed Deputy Controller General in 2018.

In between, he has held positions as Passport Control Officer and Deputy Controller General in charge of Finance and Accounts.