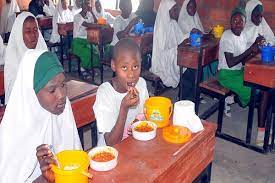 Hajiya Fatima Bisallah, Team Leader for the enumeration from the Federal Ministry of Humanitarian Affairs and Disaster Management, disclosed this in Minna on Wednesday.

The NHGSFP is a federal government-led N70 per day school feeding programme aimed at improving the health and educational status of public school pupils.

Bisallah said the exercise was a physical verification to capture and get accurate biometric data of pupils and cooks in the state to scale up the programme to include more pupils.

“The exercise is to know the exact figure of the pupils benefitting from the programme as well as have their database to enable us to scale up the number of pupils,” she said.

She said the ministry was collaborating with the National Orientation Agency (NOA) and the National Youth Service Corps (NYSC) for the data capture.

She added that the security challenges in part of the state would not hinder the exercise as appropriate measures had been put in place to cover the no-go-areas.

Also speaking, Malam Hamza Audu, the Director of NOA in Niger, said the agency had fully sensitised stakeholders and communities to ensure the success of the exercise.

Mrs Amina Gu’ar, Focal Person of Social Investment Programme (SIP) in Niger, expressed satisfaction with the quality of food being served to pupils by the vendors.

She said that about 560,000 pupils were benefitting from the programme in the state with over 5,000 food vendors engaged by the government.