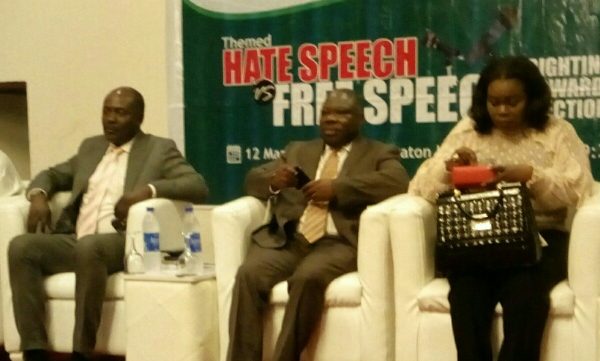 The Federal Government has been enjoined to reactivate the Nigerian Press Council and review its Code of Conduct so as to enable it discharge its duties effectively as enshrined in the Constitution.
The Chairman of Savannah Centre, Prof. Ibrahim Gambari, made the call while delivering the Inaugural PSN Confab lecture on the topic: “Towards 2019 Elections: Hate Speech and Implications For Ethnic Relations,” in Abuja on Monday.
The Confab, themed: “Hate Speech Vs Free Speech,” was organised by the Peace and Security Network in collaboration with the Centre for Information Technology and Development.
Gambari, a former Nigeria’s Permanent Representative to the United Nations, who was represented by Ambassador Abdullahi Omaki, said Savanna Centre attaches great importance to the issue of Hate Speech, which he insisted is not Free Speech.
The Guest Speaker lamented that the level of hate and inflammatory speeches seen in recent times were the worst since the return to democratic rule in 1999.
According to him: “Freedom of Speech cannot be absolute, freedom of speech has its limit.”
He added that there was an urgent need for a National Law to “redress hate speech now not later”.
On the road to 2019 general elections, Savannah Centre enjoined media managers to demonstrate absolute patriotism by not promoting any individual or group above the nation.
While stressing the important roles that the media and civil society organisations must play in curbing hate speech, Prof. Gambari, warned that “a major dislocation of Nigeria is a dislocation of the African continent”.
He, therefore, called on the Nigerian Broadcasting Commission and the Nigerian Press Council to work together to deal with hate speech ahead of the 2019 elections, while CSOs must redouble their advocacy.
Contributing, the President of the Nigerian Guild of Editors, Funke Egbemode, who was a panelist, expressed concern about promulgating a new law to deal with hate speech when there are existing laws that have not been enforced.
Egbemode posited that rather than a new law, government should be more interested in getting to the root cause of hate speech so as to guard against it.
She said many people are unhappy and would always find a way of expressing their feelings, insisting: “The laws won’t fix it.”
Another panelist and President of the Guild of Corporate Online Publishers, Dotun Oladipo, said making new laws to regulate the social media gives the impression that the Federal Government “is out to gag the media”.
Oladipo noted that enlightened and well-informed people are not that active on the social media, especially on Twitter.
He therefore, enjoined media managers in Ministries, Agencies and Departments to be more proactive by ensuring timely release of genuine information to the public via the Twitter.
Also speaking, the President of Nigeria Union of Journalists, Waheed Odusile, said the issue of hate speech must be looked at holistically.
Odusile said politicians must be mindful of their utterances ahead of elections, adding that media has a responsibility not to report hate speech.
Prof. Bolade Eyinla, who represented the Chairman of the Independent National Electoral Commission, said the citizens must recognise the importance of respecting the rights of others.
According to Eyinla, social media platforms have become instruments for propagating hate speech, saying all conscious citizens must condemn inciting the population through hate speech.
The Executive Director of CITAD, Y. Z. Yau, also lamented that hate speech is increasing as we approach the 2019 elections, calling on all hands to be on deck.
According to Yau, there should be clear understanding about what is hate speech and free speech, stressing: “It is important that we amplify that.”
Earlier, the Manager of Peace and Security Network Nigeria, Adeolu Adewumi, said the Network was established in 2013 to support better coordination of conflict prevention, response and resolution in Nigeria.
Adewumi said the PSN Confab series gathers policy makers, government officials, community leaders, experts and development partners for the purpose of discussing and reinforcing a common narrative around mitigating Hate Speeches towards 2019 and ensuring the continued presence of peace and stability.