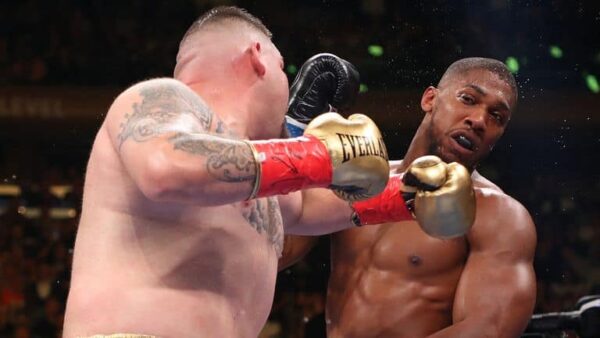 Promoter Eddie Hearn has reportedly secured a sum of over $40 million (£33.3 million) from Saudi Arabia backers to host the Andy Ruiz Jr vs Anthony Joshua rematch.
It was announced on Friday that the second bout will be taking place in Diriyah, just outside of Riyadh, with more details to follow on Monday.
The decision didn’t go down very well with British fans who had been hoping to see AJ regain his world titles in person on home soil.
Mike Coppinger claims Hearn agreed a deal with the Saudis, which will bring in a site fee of over $40 million.
Ruiz Jr’s purse is said to be around $9 million (£7.5 million) as was already agreed in the contract for the first fight, which contained this rematch clause.
Therefore, Joshua will pick up the lion’s share of the money despite the fact he has been deposed as champion and is fighting to regain his belts.
The second fight will be in Saudi Arabia
Cardiff’s Principality Stadium was previously touted as the frontrunner.
However a combination of Ruiz not wanting to come to the UK and this big money offer from the Saudis meant that the bout has instead ended up in the Middle East.
In the past year, the Middle Eastern nation have delved into boxing, hosting two notable bouts with relative success.
The World Boxing Super Series super-middleweight tournament final between Callum Smith and George Groves all went to plan in Jeddah last September, and Amir Khan’s last fight against Billy Dib took place in the same city.