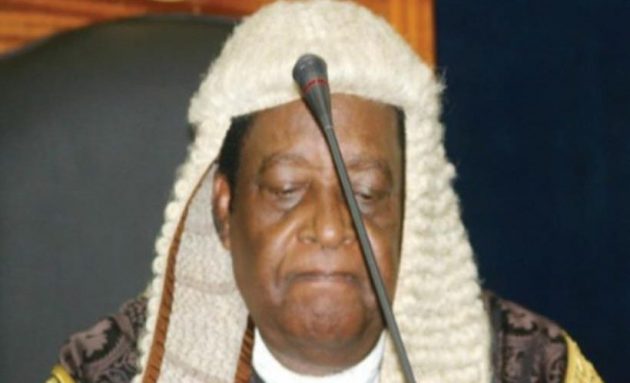 The President of the Senate, Dr. Abubakar Bukola Saraki, has expressed deep sorrow over the death of a former Chief Justice of Nigeria, Justice Aloysius Katsina-Alu.
Saraki in a statement by his Special Adviser on Media and Publicity, Yusuph Olaniyonu, described Justice Katsina-Alu as a patriotic and diligent public servant whose many well considered judgements enriched the nation’s jurisprudence and contributed immensely to national development.
He commiserated with the immediate family of the deceased, the Tiv Nation, the Judiciary, the Government and people of Benue State over the sad incident.
Saraki said: “We have lost a worthy and exemplary Nigerian. We have lost a legal luminary who’s numerous contributions to the development of the nation’s judiciary cannot be quantified.
“It is regrettable that he left us at a time his experience and wise counsel would have been invaluable in tackling critical national challenges confronting the country.”
Saraki prayed to God to grant the soul late CJN peaceful rest and his family and loved ones the fortitude to bear the irreparable loss.